A Ride Southwest From Vizag, Ending in Bangalore 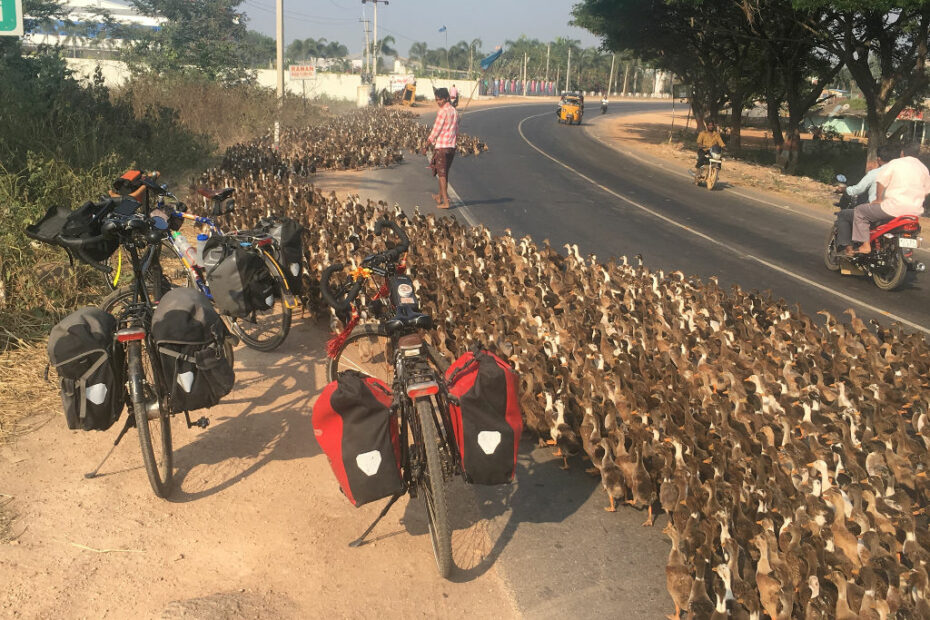 A ride southwest from Vizag, zig-zagging to turn 970km into 1,400km. We fly out of Bangalore 19 days later. In the first week we were in the delta areas of Andhra Pradesh. We crossed the Godavari and the Krishna rivers. Moving inland, the ghats in central AP are scattered. The tribal presence seen in northern AP and Odisha are minimal here although we did pass through some remote forests. The bikes are two Rohloff and one 27sp. It is Dec 2017. There has been a dramatic change in India, apart from demonetisation. Smartphones have arrived. Indians have gone “selfie nuts”.

Off we go. We can sense we are in for a great time.

We stop in a village and watch as the dosa plate fires up. Perfect hosts they are. They would not even let us pay.

The openness of the faces we see along the way is the best thing of all. It’s the universal language and we love it.

Ducks are a growth industry in coastal paddy areas. We are on a reasonably busy road and these few thousand ducks are moving from one paddy, across the road, to another. Everyone stops.

We are about to cross the Godavari. The big east-flowing rivers of south India start in the western ghats. Due to the monsoonal rains, by the time they reach the coastal lowlands in the east, they are several kilometres wide.

Bike tourers share a closeness with farmers in the old world. You only have to go there in order to feel it.

We are travelling at the same speed as lots of other people on the road. There are lots of these interchanges in which we are all having fun being side by side.

We encounter media every day and often ride through towns and hear “Australia” mentioned on the side of the road, meaning we were in the local paper that morning. Indians must be one of the most curious peoples on the planet.

These women make mudbricks. We all stop and take the spectacle of each other in. Except that they are far more spectacular than we are.

We’re not getting anywhere because we are having such a good time hanging out along the road. The people are so nice to us.

The colour here just knocks your socks off, with such beautiful skin.

We are in the forest area now. Goat herders.

The three-wheelers go a little bit faster than us, so we have these interchanges with the people in the back. We can’t help but comment on how happy people seem here.

They are getting ready to plant seed for rice seedlings. They want smooth mud. The animals understand what to do. They have done it this way for hundreds of years.

You cannot have too much of this. Touring out on the back roads in India is the best. Especially on the Deccan.

We pack at Bangalore (BLR) using materials we bought on the last day as we rode through the last towns. Coir rope, bath mats, tarpaulin. So much easier than scrounging for a carton in town and getting transport.