We design bikes that are ready for touring and lights are a key part of them. Even if you ride mostly in daylight, you still need lights. For example, tunnels sometimes just appear. Along the Fernleigh Track at Newcastle or on Black Sea coast in Turkey or anywhere in Japan. You can not tell from most maps that they are there. Most are not long but going in without lights is mad.

Or, sometimes you are late arriving at your next camp or hotel. It could be for any one of numerous reasons. Imagine this scenario….you don’t know the road, there are no street lights, you are tired, your buddy is up ahead looking around to see where you are. Thank goodness you have lights, and ones that work.

Perhaps you are touring in Vietnam, Sri Lanka, central America or anywhere near to the equator and are surprised to find it is pitch black dark at 6.30pm. In the East Kimberly in mid June it is dark by 5.20pm. Or, it is unseasonably hot and you decide to set out in the dark so as to arrive by noon. You need lights before the sun comes up.

Bikes used in everyday life in cities need lights too. A person who uses a bike daily is going to be riding sometimes while the sun is down.

It is self-evident and we should not need to make the point. However, most bikes sold outside of the few countries that mandate lights (eg Germany) don’t have any lighting system designed into them. It is simply not true that lights can be added later with as good a result as if they were designed into the bike.

Lights Being on in Daytime is Good for Safety, Especially if You Are in Traffic

With a dynamo you can leave the light on permanently. No batteries or recharging is required. The system is integrated into the bike and you don’t need to remove the lights when locking up your bike. Being integrated, they are not vulnerable to the daily jostle your bike endures. Yet we see virtually no dynamo systems on bikes in Australia, NZ, the US and Canada. If they are so good why are they not on new bikes? The main reason is that lights are not required to be supplied with new bikes in these countries. In addition, authorities mostly ignore the fact that some cyclists are riding after sundown without lights. However just because authorities don’t seem to care is not a reason for us to overlook this part of bike design.

On motorbikes, Daylight Running Lights (DRL) are mandated in many places. The small frontal area of a motorbike has been found to be a reason why they are less conspicuous on the road. Surely this is just as applicable to bicycles.

The best dynamos are in front hubs and have to be integrated into the wheel at manufacture.
So, because of the benefit of having lights on all the time, and the independence of making the electricity yourself, with the exception of specific lightweight racing machines, bikes should all have dynamo front hubs.

Rechargeable Battery Lights – Why Not?

There are some very bright rechargeable battery powered lights. But they are no good when you can’t recharge them which may be the case when you are on a tour. Even in town, recharging is another chore. And then, with battery lights, you have to make sure they are not stolen.
Whilst a dynamo has a small amount of drag, recharging batteries daily, over the years, is a bigger one. With a dynamo you just leave the lights on permanently and forget about them.

Lumens, Lux and Light Projected onto the Ground

Lumens is the measure of all the light coming out of a headlight. Lux is the measure of light in the centre at a spot on the road a specific distance away. In the European bike light standards, a distance of 10 meters is the base point. So lumens and lux are quite different things. The ‘aftermarket’ for bike lights, including their on-line retailers, usually only talk about lumens. They imply that the more lumens the better. There is generally no attention paid to the shape of the beam on the ground.

The European standard defines the ideal shape of a light beam. Lights are designed to throw the light onto the road. This means focused cut-off optics like a car’s headlight, which keeps the scattered light to a minimum. From the side and from above the cutoff line of sight (say, an oncoming driver’s or cyclist’s head), the light is nothing more than a glowing spot. The beam isn’t super-wide, but covers the bike’s path well.

VWR bikes from 2015 use the AXA Luxx70plus. Not only is the brightness of this light impressive, but it also features intelligent beam technology which ensures optimal light distribution, based on bike speed. Up to a speed of 12 km/h, two additional diodes are activated which provide additional illumination for the near field. At higher speeds, the main diode operates at full power, providing longer range light. The light meets German (StVZO) and French regulations. You will see debris or holes in the dark with this light. It is bright enough for night riding at 30kph. 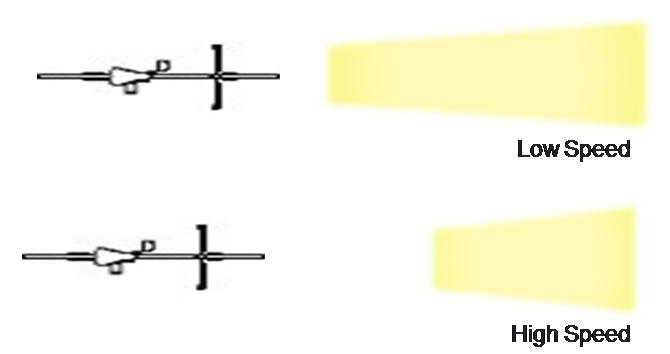 Like other quality lights this one features a parking light that stays on for four minutes when the bike is still. Necessary at traffic lights. It also has two pivot points on the mounting bracket meaning that you can set it where you like.

USB charging from the Headlight

The AXA Luxx70 plus includes a USB port for charging electronic devices such as GPS, mobile phones or MP3 players. Charging is done with the lights off. Output is 5 volts, 0,5. Axa says the bike needs to be travelling at least 15kph but in out testing we noticed the beeping that occurs at the onset of charging at about 8kph. We have been able to charge both a Galaxy 5 and an iPhone 5 from scratch in a day’s riding. In a way this is a small thing. It is just a bit of electricity. But it feels really good being able to do it under your own power.

The AXA Riff model stands out. It is visible at a surprising distance including on an angle. It also stays on for four minutes after you stop. It is lightweight but robust. It fits within the frame of Tubus Logo carrier.