Essentially, a gear system allows you to vary the number of times you need to turn the pedals for a given distance travelled. Because each turn gives you an extra push of the pedals, when climbing or in headwinds, using low gears, you can turn the pedals more times and strain less per turn. Or you can travel further with each turn in the high gears.

You need your low gears to be low enough to allow you to get up hills whilst carrying luggage. At the same time, you don’t want to “run out of gears” on the top ratios. It is great being able to still pedal if you are on a long downhill run.

The total range of your gears therefore should be high. That is not to say the greatest range ever devised is the best. There are other issues such as weight, serviceability, and the practicality of the gear shifting. Touring bikes should have a range of at least 500%. If you mark the distance the bike goes in top gear in one pedal rotation, the same distance in bottom gear would require at least five pedal rotations.

To work out ratios without knowing the number of teeth and the formulae you can simply count the pedal turns and wheel turns on a bike. For bike touring, in the lowest gear, on full-sized bikes (26”, 27.5”, 28”, 29”), for one turn of the pedals, the back wheel should go around no more than ¾ of a turn. So four turns of the pedals should give not more than 3 turns of the back wheel. You can do this same test regardless if it is a derailleur system or on an internal gear hub bike.

Broadly there are derailleur and internal gear systems:

When buying a touring bike it is good to have a choice of these systems to see which one suits you. 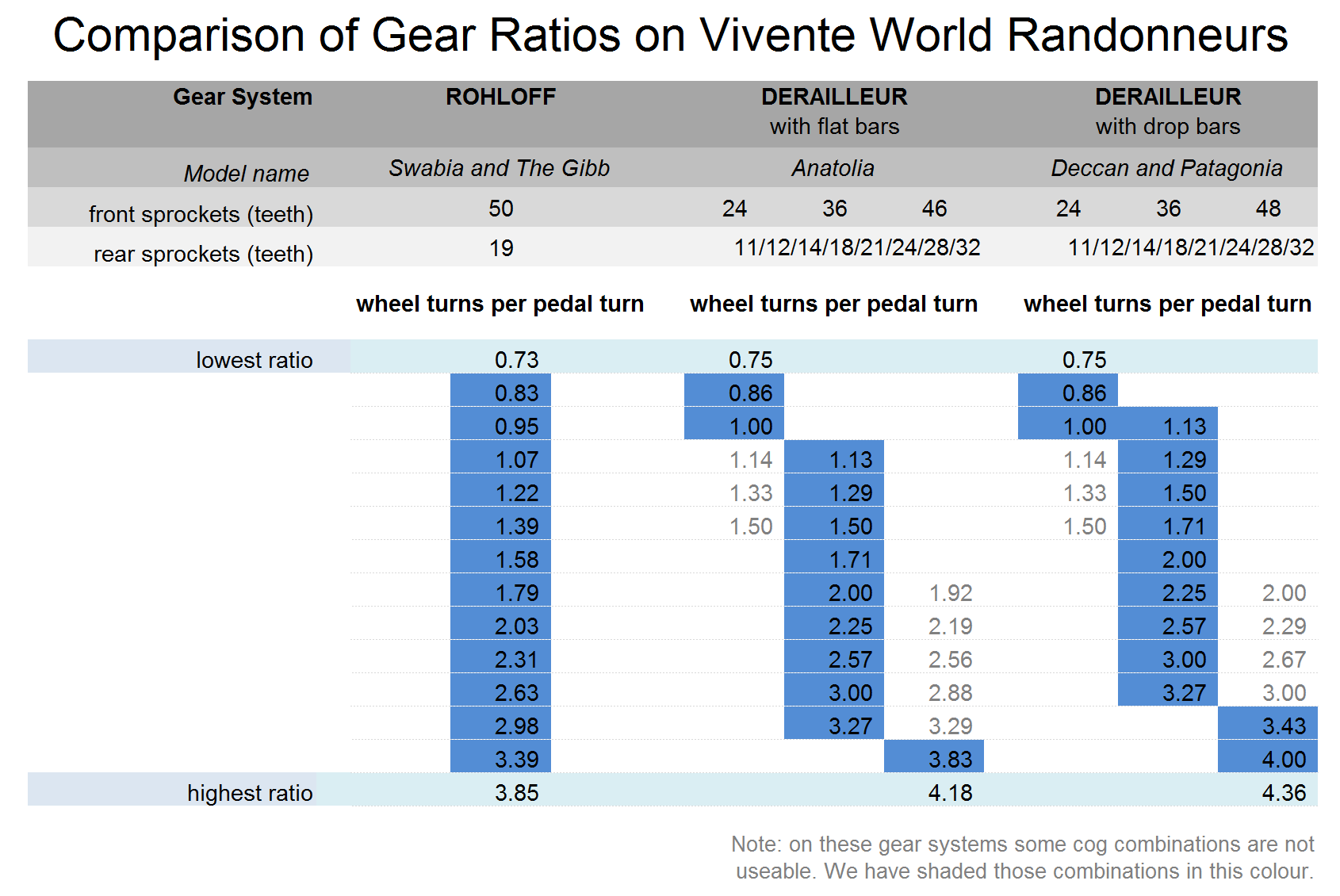 A derailleur system is far less expensive and is used on over 80% of touring bikes.

There are no problems operating gear levers on these systems and regardless of the handlebars chosen the gear levers work very well.

VWRs with derailleur systems are 600g lighter than the internal hub models. The difference is reduced a bit on long trips where Rohloffs(internals) need fewer tools and spares.

Chains and sprockets do wear out faster on derailleur bikes but still last many thousands of KMs. And there are strategies to extend chain and cog life.

The rear derailleur is a point of vulnerability although the majority of riders are not having any bad experiences. There have been occasional reports of sticks getting caught and bending a rear derailleur, and owners have more to worry about when their bike is in transit. 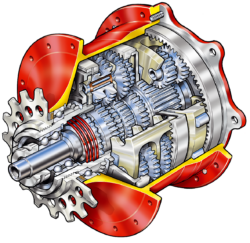 The Rohloff 14sp hub provides a gear range of 526% which is one or two gears short of what’s on VWR derailleur bikes. By comparison, a Shimano Alfine 11sp hub gives 409% range so is considered inadequate for long distance riding.

The gears are all evenly spaced (13.7% from one to the next) and there are no redundant gears.

If you want, later on you can vary the level of the gears by simply changing the front, rear or both sprockets. On a derailleur bike this is not easy to do, or is not even possible.

In the first 3,000KM to 4,000KM on a new Rohloff hub there is a slightly detectable drag in the lower gears. By 5,000KM this not noticeable. Hub noise also reduces and after a while, in the top seven gears, it is not discernable.

Shift lever operation is very accessible, smooth and comfortable regardless of the handlebar set-up chosen.

Because you have single sprockets front and back you can use a carbon belt rather than a chain. A Gates carbon belt lasts as long as three chains. It needs no lubrication, can be washed with water, is very low friction, is much lighter and runs silently.

A lot has been said in praise of Rohloff but the comment that rings the loudest to long-distance cyclists is that they “wear in rather than wear out”. There are many reports of people exceeding 100,000KM on the same hub.

A key feature of a triple crankset is that you run in the middle cog most of the time and have a large and small cog mainly for special situations. So most of the time the chain runs in a fairly straight line. This is not the case on so called ‘compact’ or wide range double chainwheel systems. They also lack the necessary low gear ratios.

In the case of VWR drop bar derailleur bikes there is a choice between bar-end and STI shift levers.

Although the Rohloff system costs about AUD$1,750 more there are plenty of claims it is actually cheaper due to its longevity and low maintenance cost. VWR test riding bears this out.

Rohloff’s gears are inside the hub shell. It was originally built as an all-season MTB hub, for use in Northern Europe’s extreme conditions It is well sealed and the internals run in an oil bath

Rohloffs are virtually maintenance free. You are supposed to drain out the oil and replace it approximately every 5,000KM. It is very easy to do and fully explained on a small and lightweight kit they sell.

Rohloffs allow you to shift gears when not pedaling. That’s very appealing if you are stopped at traffic lights or at the bottom of a hill.

With just one cog front and rear, Rohloffs run a straight chain line.

Rohloff hubs have less dependence on a shifter than derailleur drivetrains have. You can even change Rohloff gears with an 8mm spanner. The “indexing” of the gears takes place inside the hub. This means that the twist grip itself is a low tech item. There is little that could ever go wrong with it whereas on derailleur systems the shift-levers are not only critical but can get damaged.

Rohloffs never slip or jump. This does happen on chain-gear systems to an extent and is annoying, especially if you are out of the saddle.

Some Rohloff advocates claim that Rohloff wheels are inherently stronger because they don’t have the offset needed on wheels with a cassette. This is not true in VWR’s case where the wheels on derailleur models use Alpine III spokes. These are thicker at the hub end. These spokes are not permitted by Rohloff due to the size of the spoke holes in their hubs. Alpine III spokes make VWR offset wheels at least as strong as VWR Rohloff wheels.

Compared to other internal hubs, including the Shimano Alfine, there is no spongy or springy feel. Rohloff is as direct with the power transfer as the drive train on a conventional derailleur system.

After 30-40,000KM one or more of the seals inside the hub will begin to let a little oil through and some of this oil can get as far as the rear brake pads. This is a very gradual development. As it begins you know the time to have the seals serviced has arrived.

Efficiency of drive trains is also important. You want as much of your power as possible going to the rear tyre on the ground. This is a technical subject and there are claims and counter claims. Chester Kyle and Frank Berto published a major study on it. They found that the chain gear system was about 2% more efficient, which over a distance is a lot. However, they used a new hub. Experienced Rohloff users agree that by the time of the first oil change (4-5,000KM) this initial drag virtually disappears. 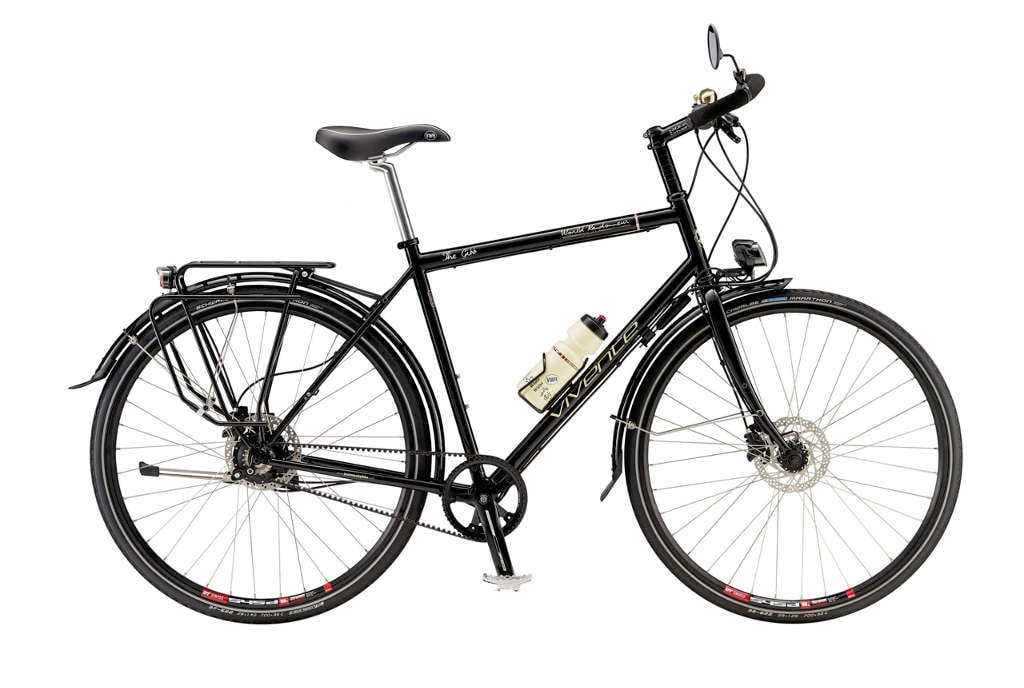 State of the art. Comfortably ride around the world on The Gibb. 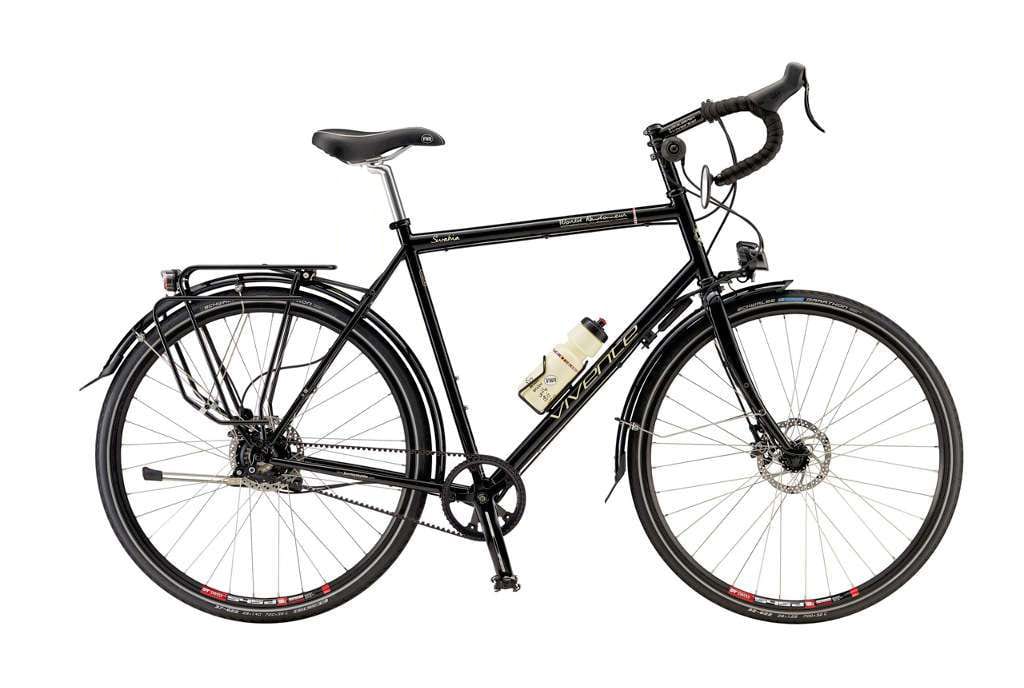 The finest touring bike made. For lovers of the never ending road. 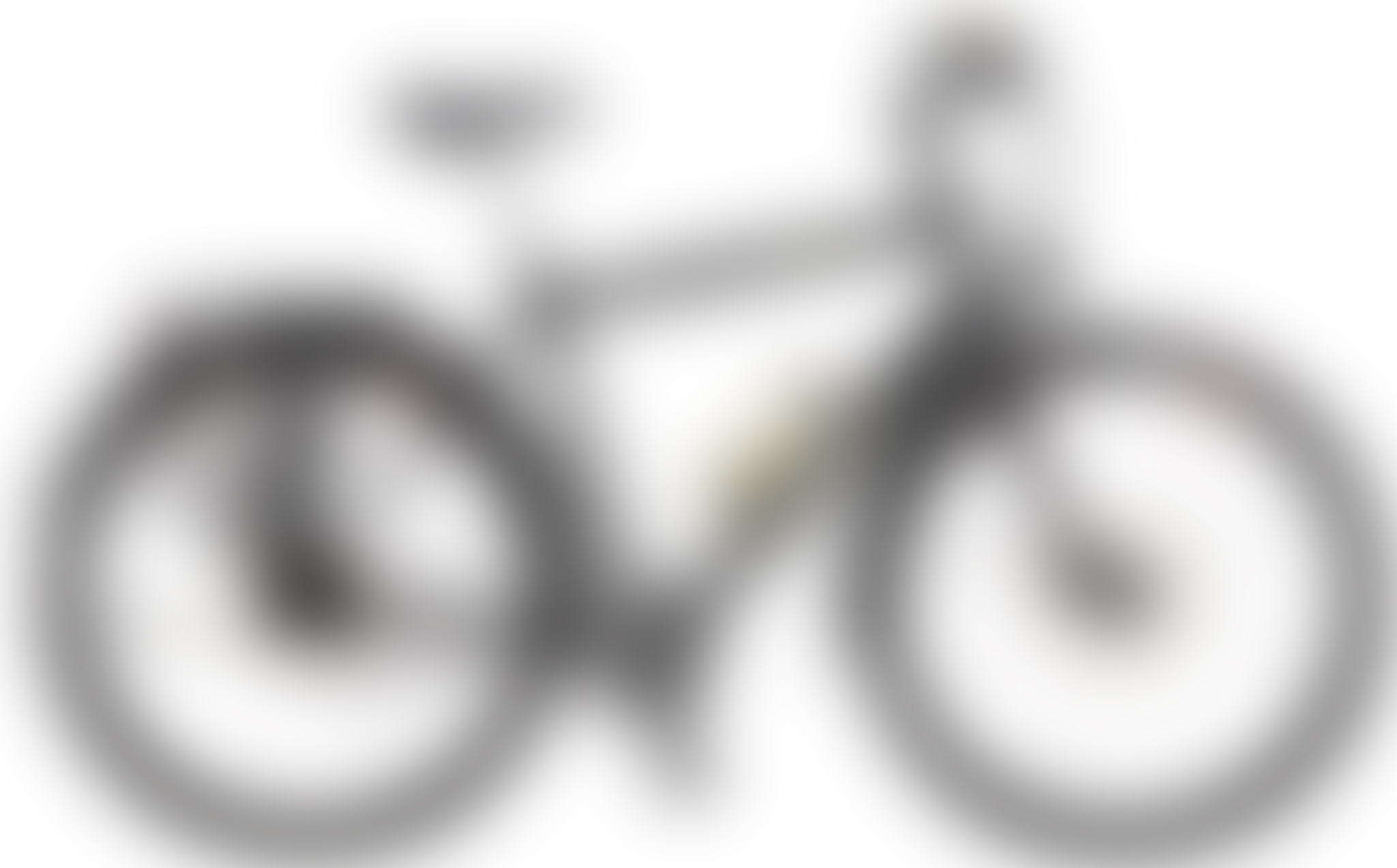 From the Stirling Ranges to the Caucasus, ride across the planet on a Stirling.