Chicago to Minneapolis with my son and a snapping turtle

A 1,200km A to B ride in mid-summer, returning to Chicago and O’Hare airport on Amtrak. We are riding a Swabia and a Deccan, testing a few things including the new Busch & Muller IX-Q 100 lux headlight, Goodyear Transit Tour tyres, Rokform and Magsafe smartphone mounts. See the Test Report at the bottom of this page.

The ride takes us over the July 4th long weekend and there are flags everywhere. The weather is perfect, mid to high 20’s. The roads are so good that there is seldom a need to seek out bike trails. There is always a wide shoulder. There are some bumps in the tar due to harsh winters.

Drivers are courteous. In fact, they are some of the best drivers in the world, which I admit surprised me. We have been on several rail trails because google selected them and they have been great. Google route mapping has been good 99% of the time. You don’t need to plan routes much as there is just so much paved surface. 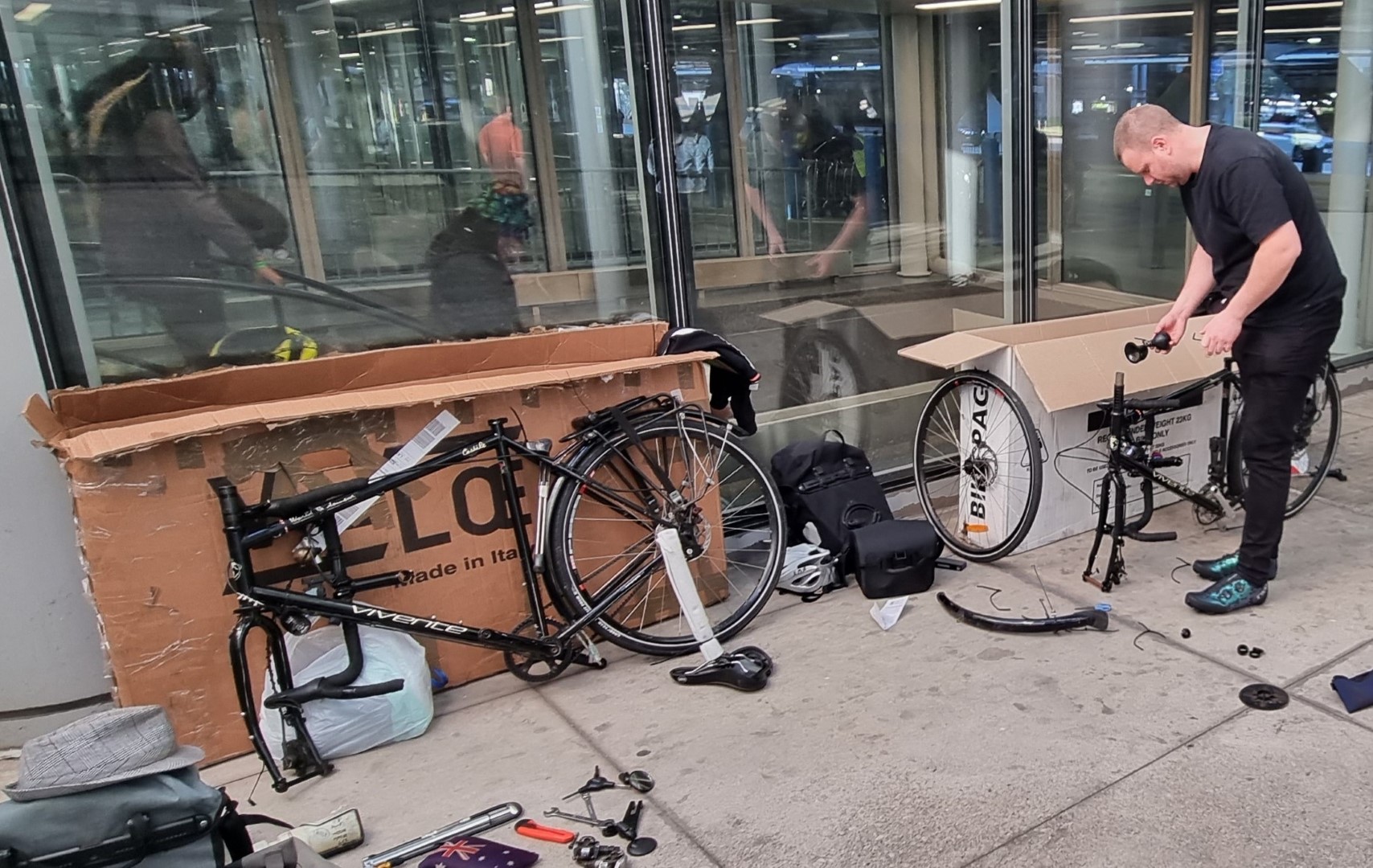 After landing at O’Hare, we put the bikes together and try to ride out but soon encounter a twelve-lane ring road. Instead, we catch the train 1 stop and then ride to Des Plains station and get the metro (NW) train to the city outskirts. 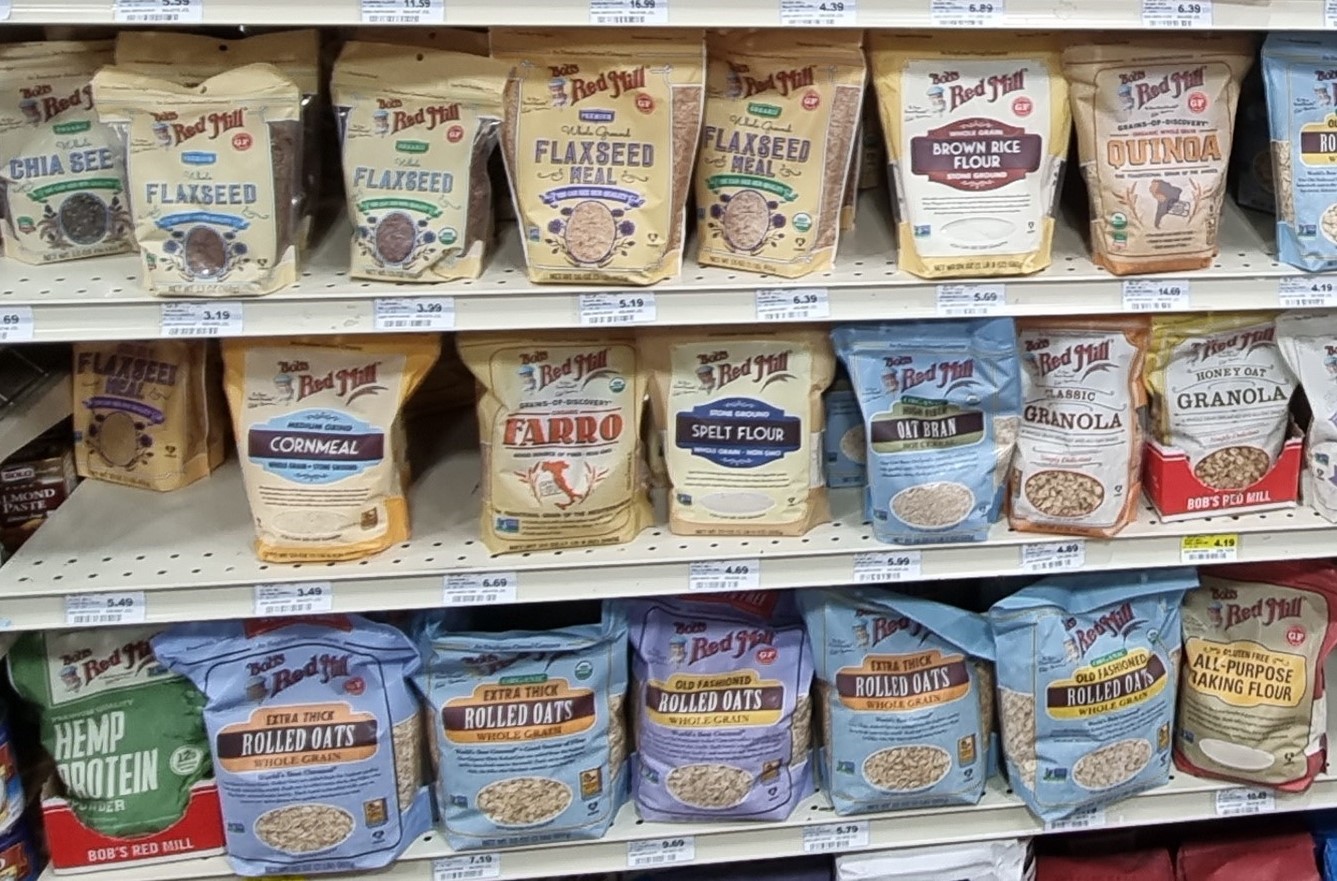 These days, my breakfast is a combination of grains (which I carry), fresh fruit and dairy. I soon find the grains (linseed, flax, oats etc.). Blueberries and strawberries are in season. I’ve never eaten this many strawberries! 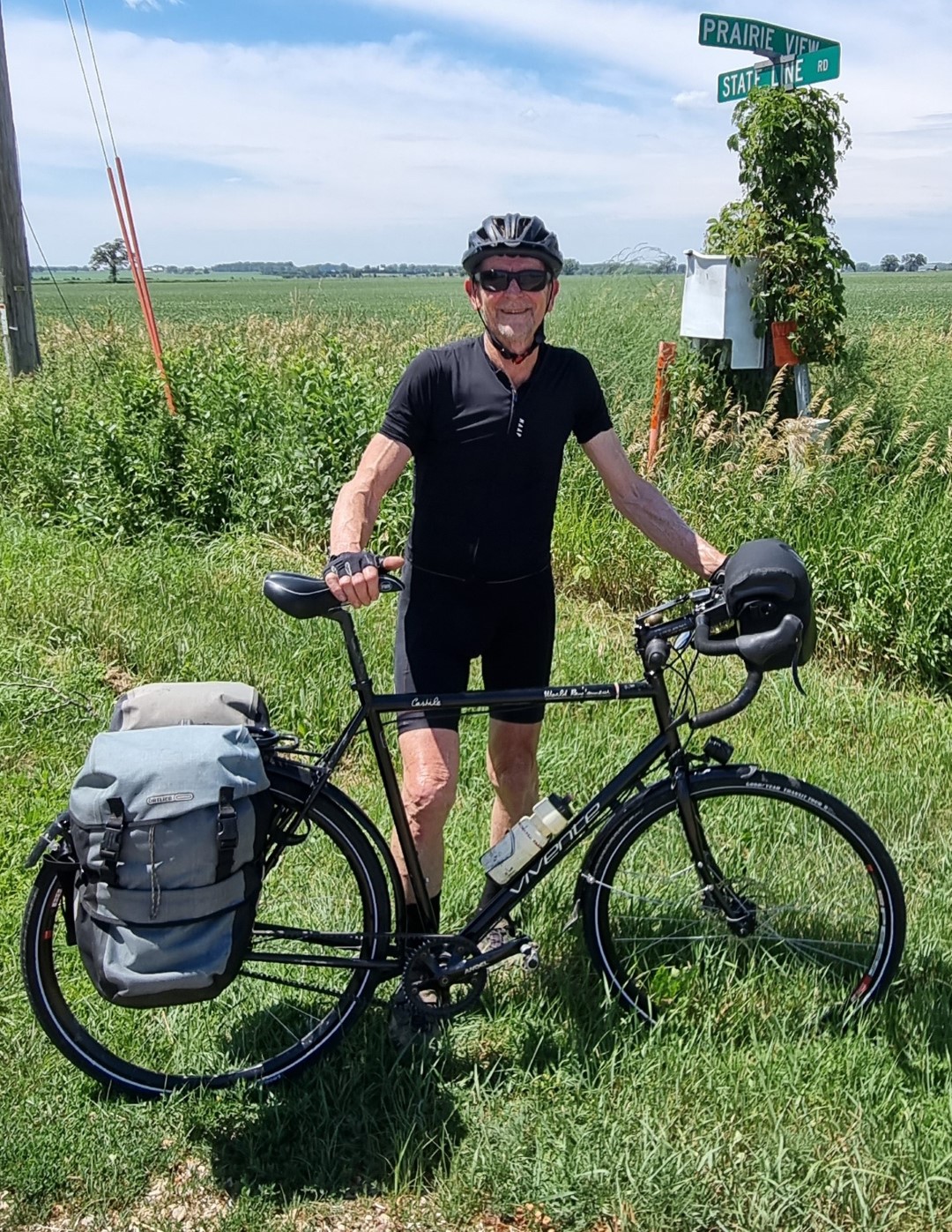 We head north over the state line into Wisconsin. Over the next three nights stay at Delavin, Watertown and Princeton. 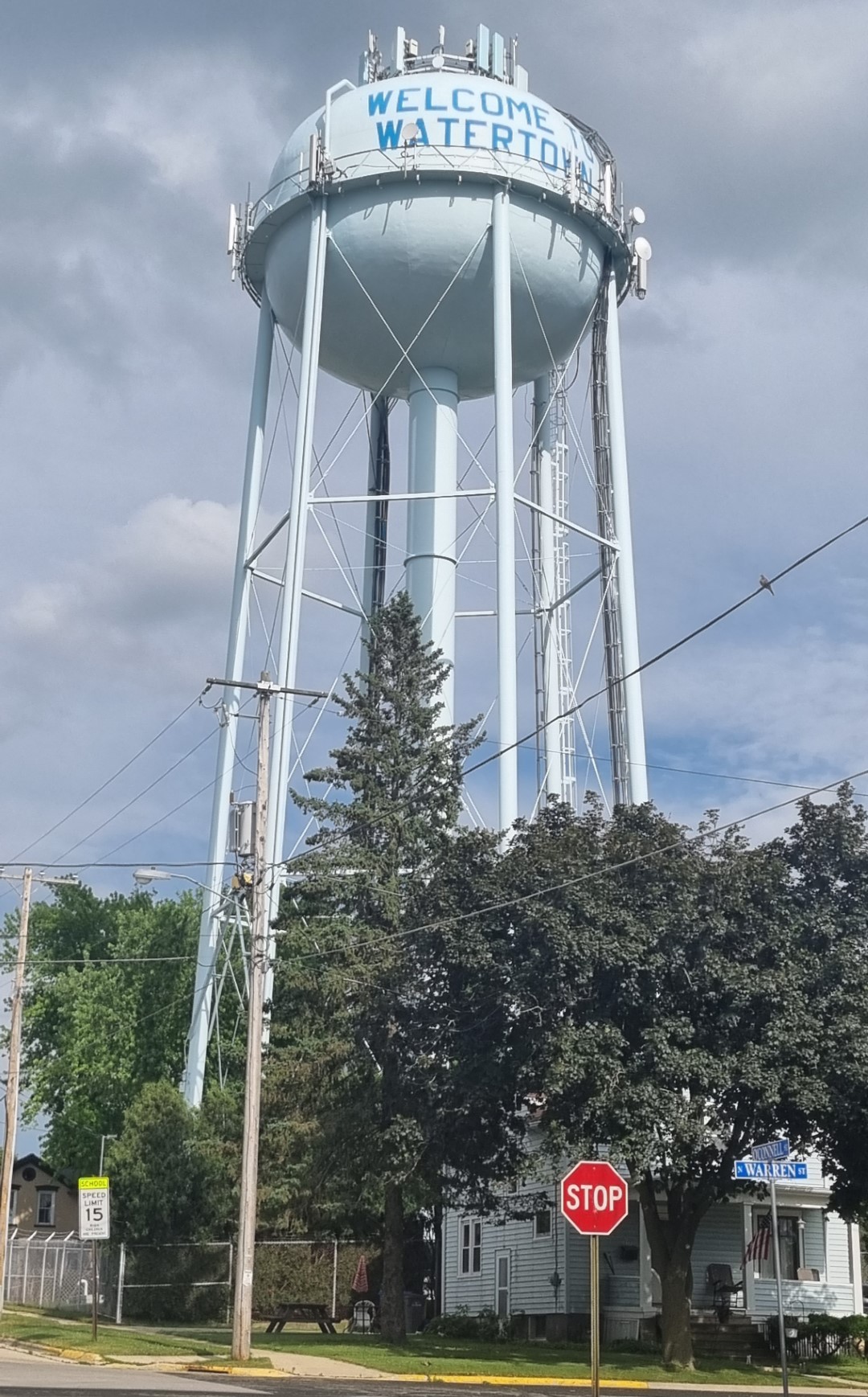 Just about every town has a water tower, often impressive and a landmark we can see from a distance.

There are some fine examples of old timber houses in Wisconsin country towns. 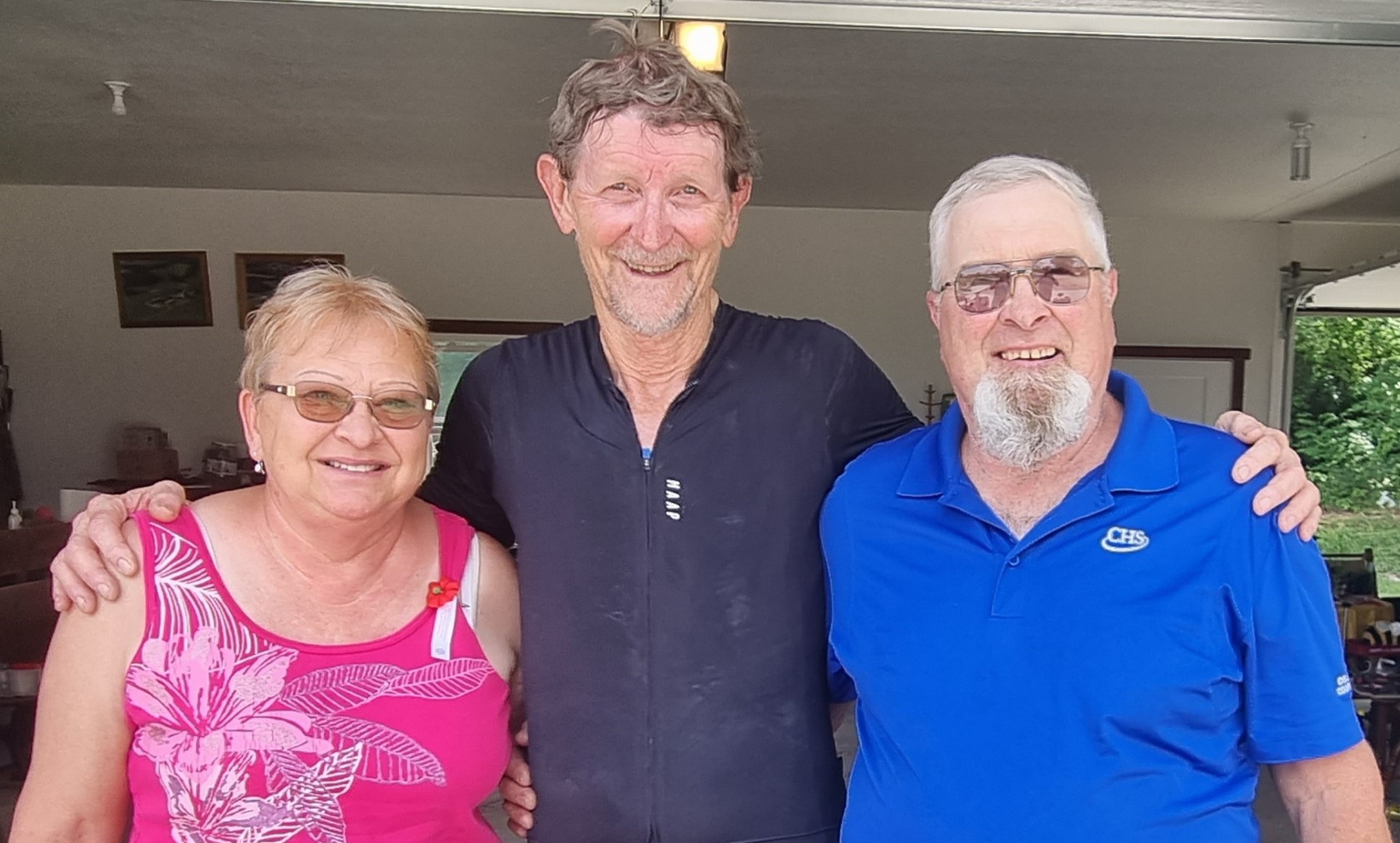 We call in on my brother and his wife near Waupaca. I was a foreign exchange student here when we were both seniors in high school. It’s so good to be back together and to catch up with old friends. 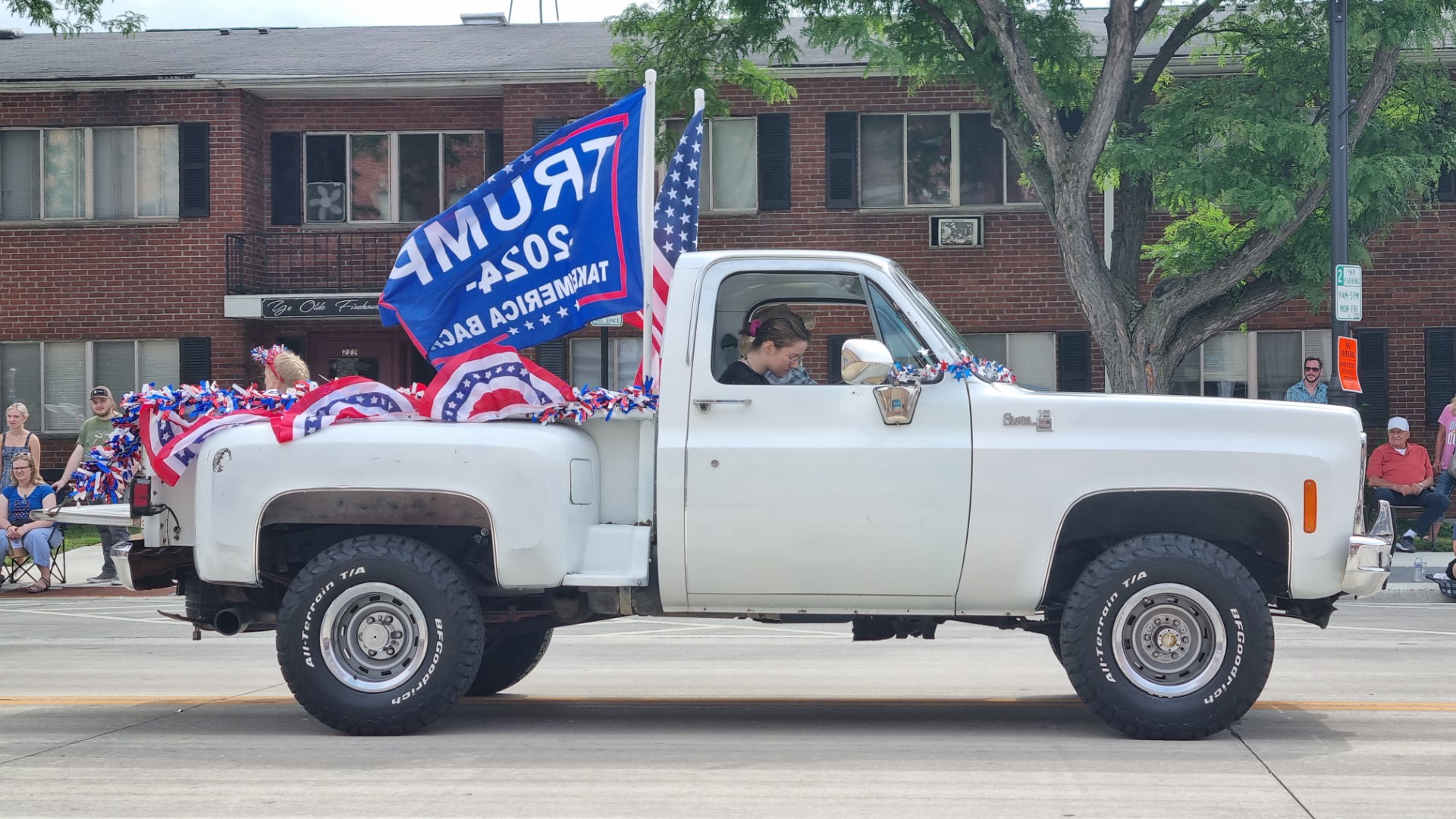 We are watching the Fourth of July parade in this central Wisconsin town. There are marching bands, veterans, fire brigade, active seniors, candidates for sheriff in the looming elections and the local branch of the GOP.

Mr Trump’s effort to still be the president, even though he was not elected, is not seen as an irony on this day when the country celebrates freedom from an unelected British king. That’s what 4th of July is. 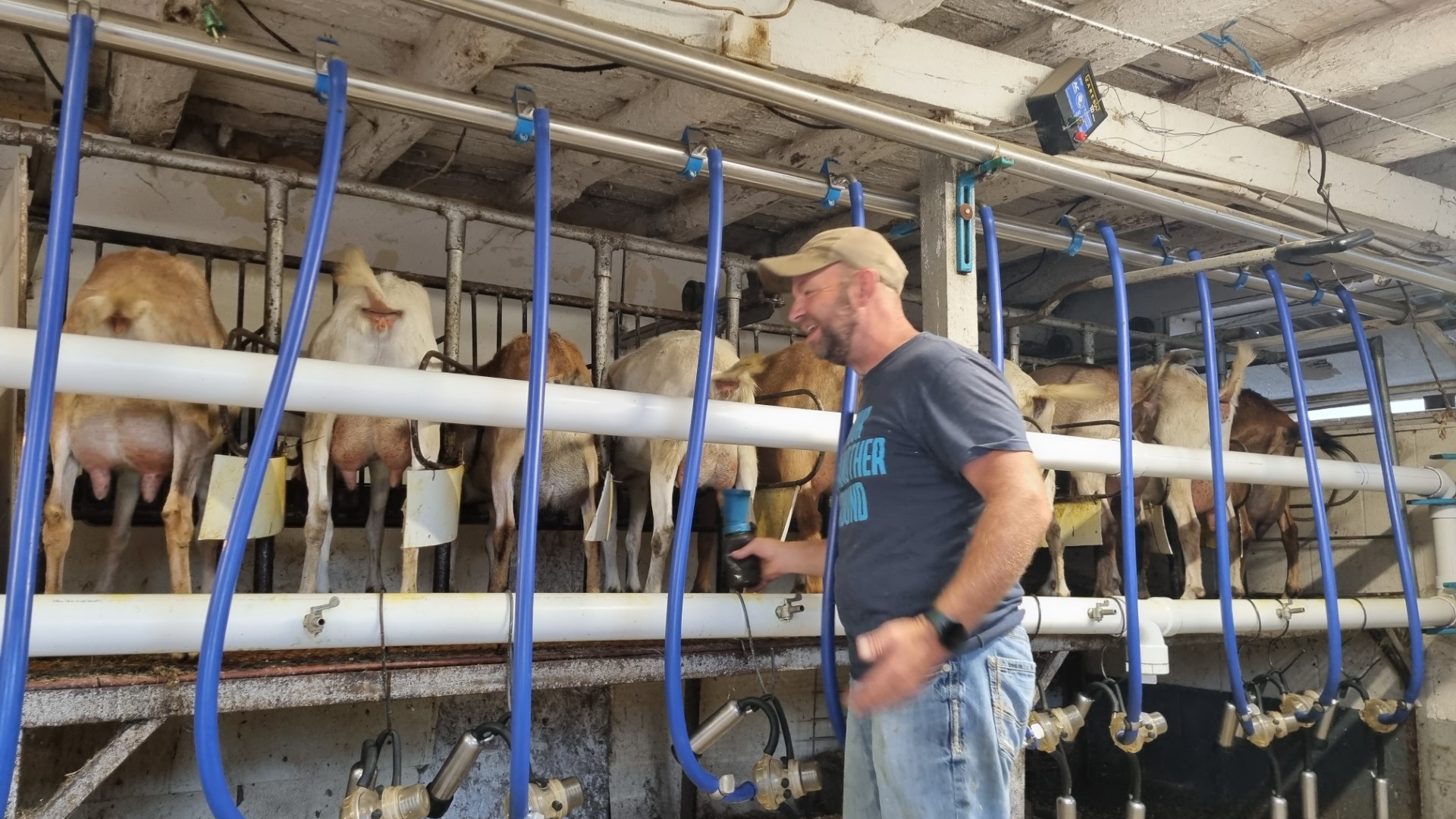 A dairy goat milking parlour. Tom and Kari are milking 120 does a day and each one averages one gallon (about 4.5l) a day. 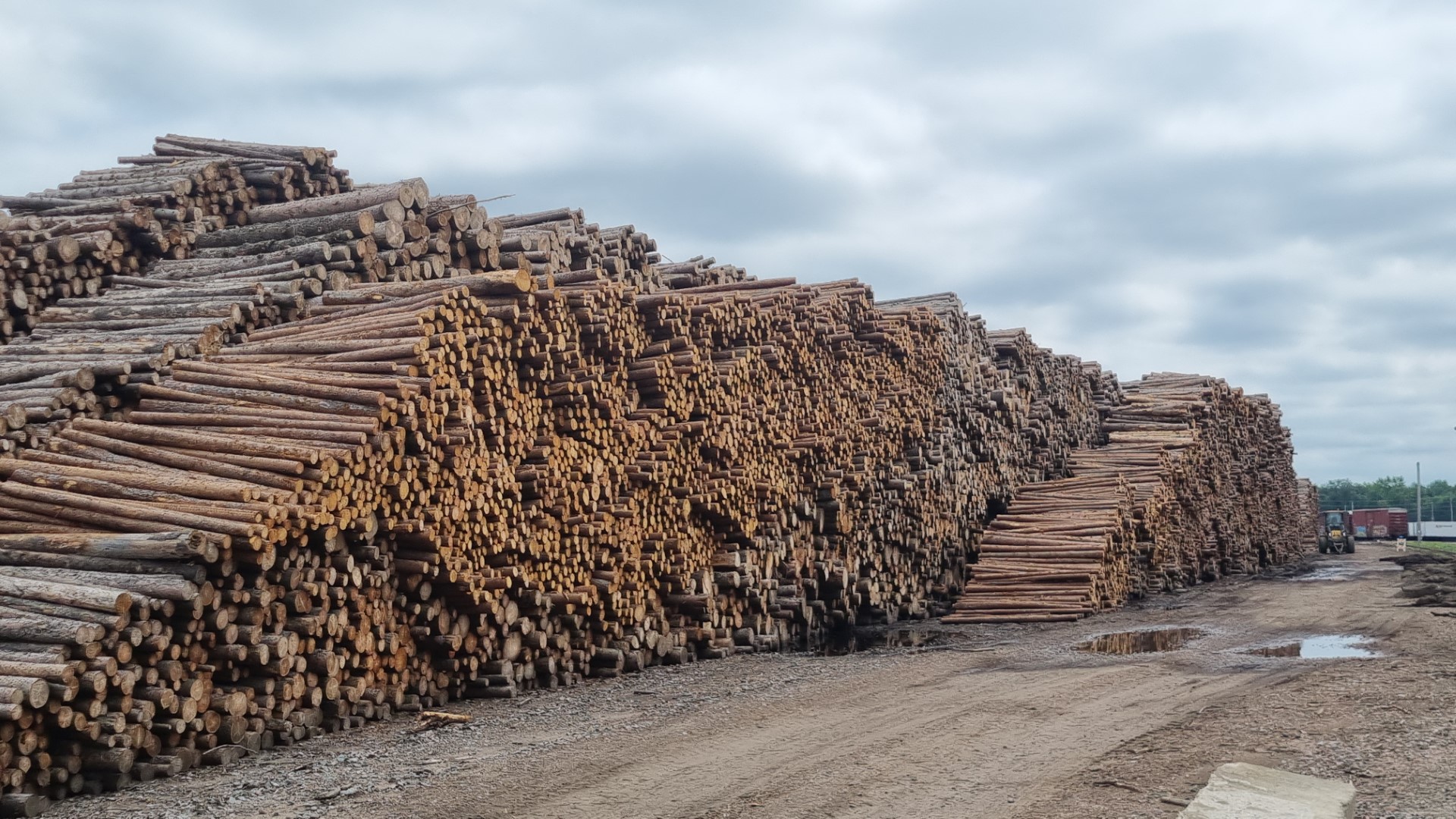 At Wisconsin Rapids we pass a massive paper mill. This is a small part of the pine log stack. 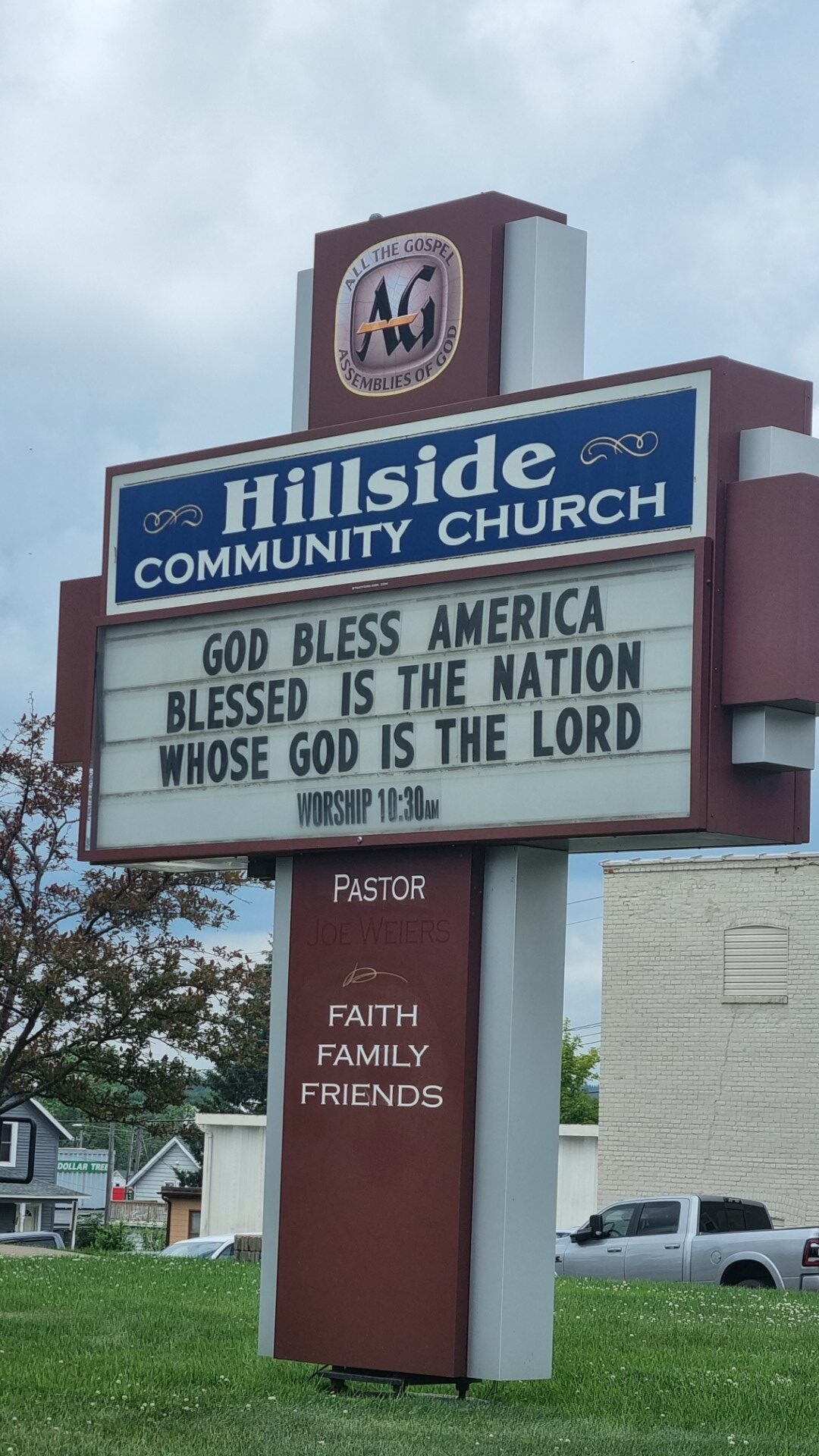 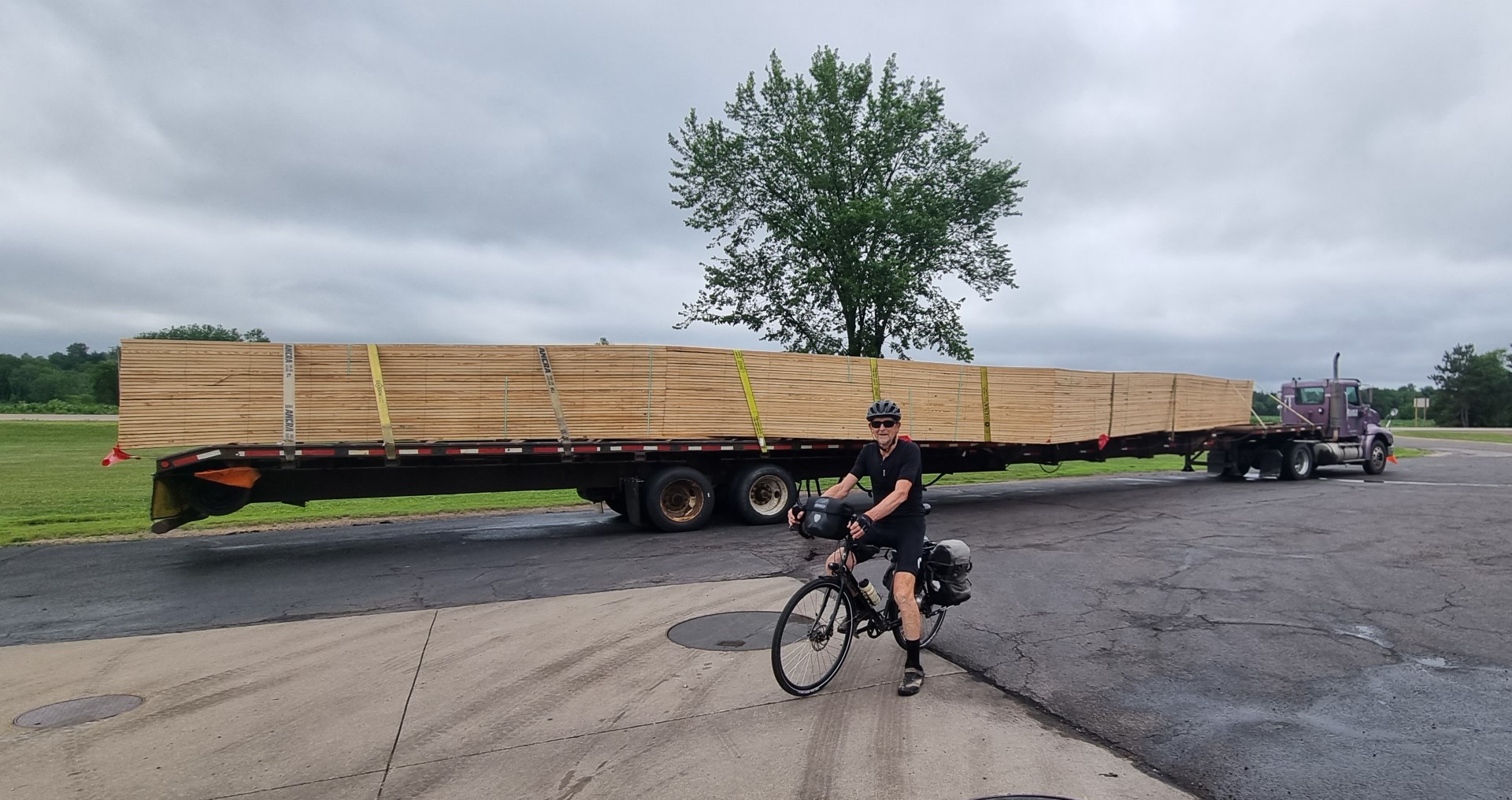 We are passing Amish communities daily. They use buggies to get around and use Clydesdales in the fields. 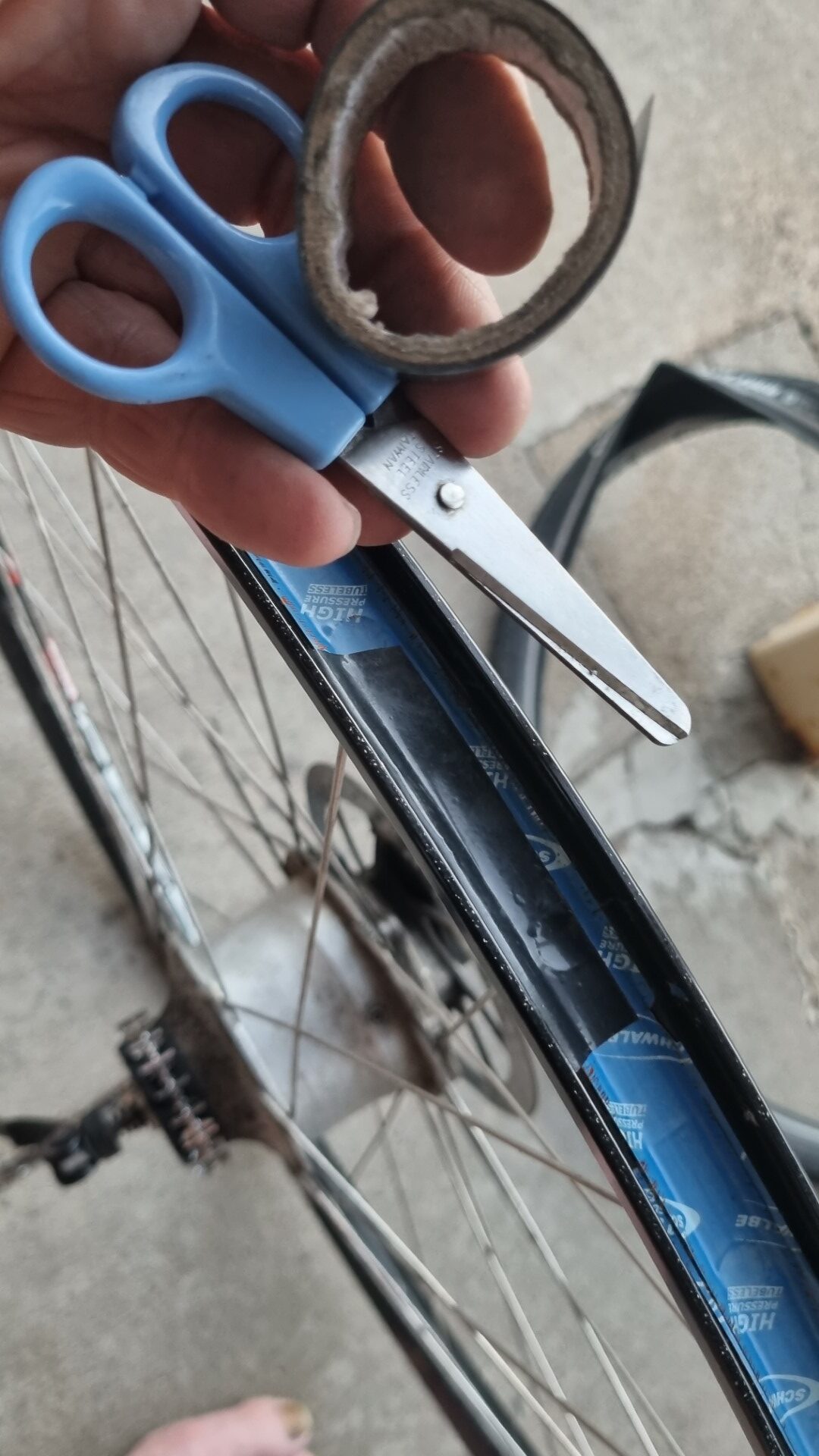 A plug for carrying a bit of insulation tape and a small pair of scissors. This Schwalbe rim tape is one of the extra strong ones made for tubeless systems. It has cut the inner tube.

Farm buildings in Wisconsin and Minnesota. What they can grow in 4-5 months needs to be stored for the long winter.

It’s not uncommon to see turtles when bike touring. Being reptiles, they sometimes sit on roads to get warm, and they sometimes get run over. So, I always move them off the road. Usually that is not hard as they retreat into their shells.

But this one (called a Snapping Turtle) is aggressive and objected strongly. It tried to bite me. She was not moving so I pushed her off with a stick. 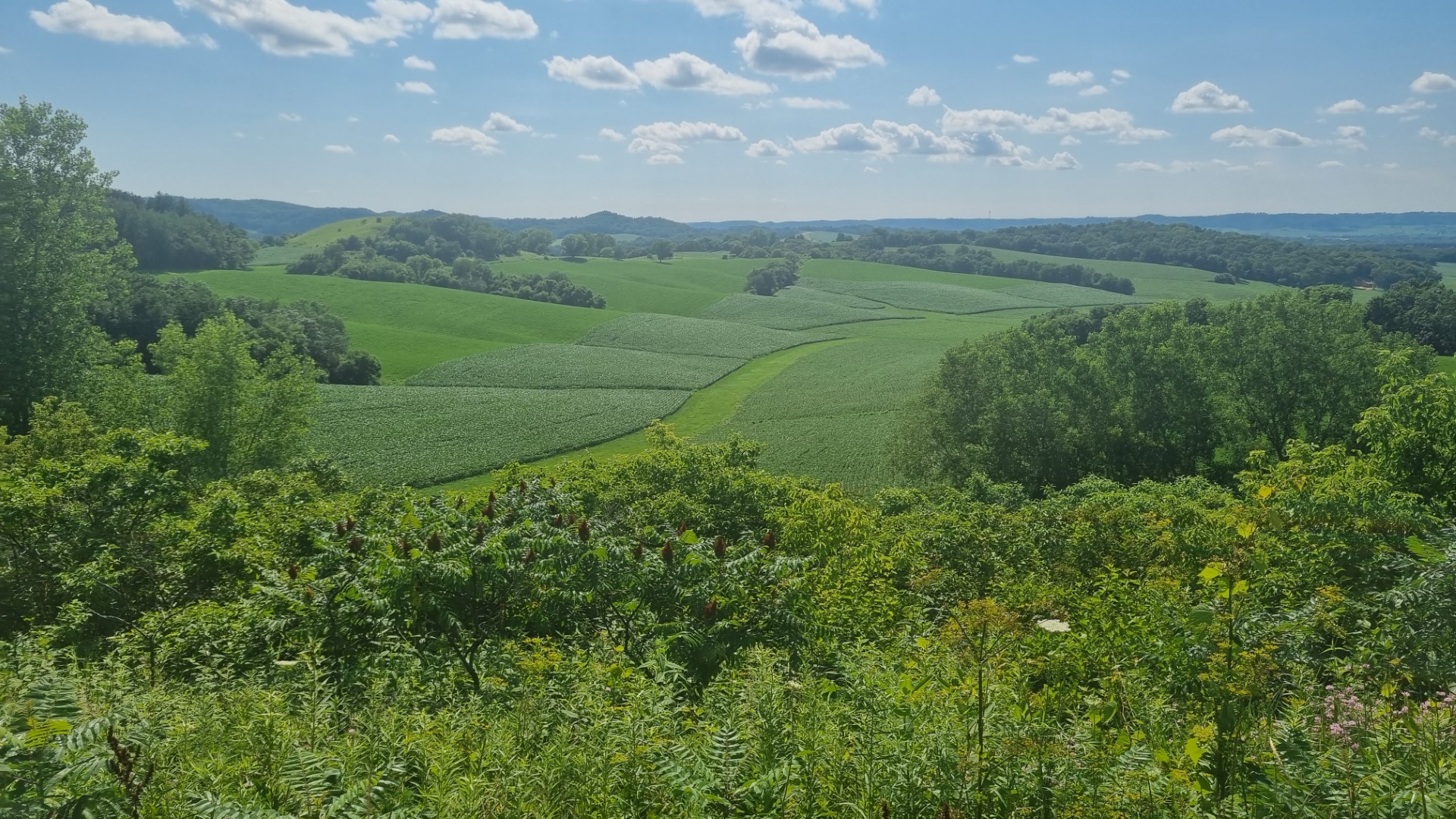 The “Driftless Area”. What is called moraine in Europe, in the USA is called “drift”. In southwest Wisconsin and southeast Minnesota there is an area that was not covered by glaciers.

Most of the upper Midwest was. The hilltops were not shaved off and the valleys were not filled by soil and rock (drift) as the glaciers melted. Hence this is called the Driftless Area. We are in hilly country for a few days. 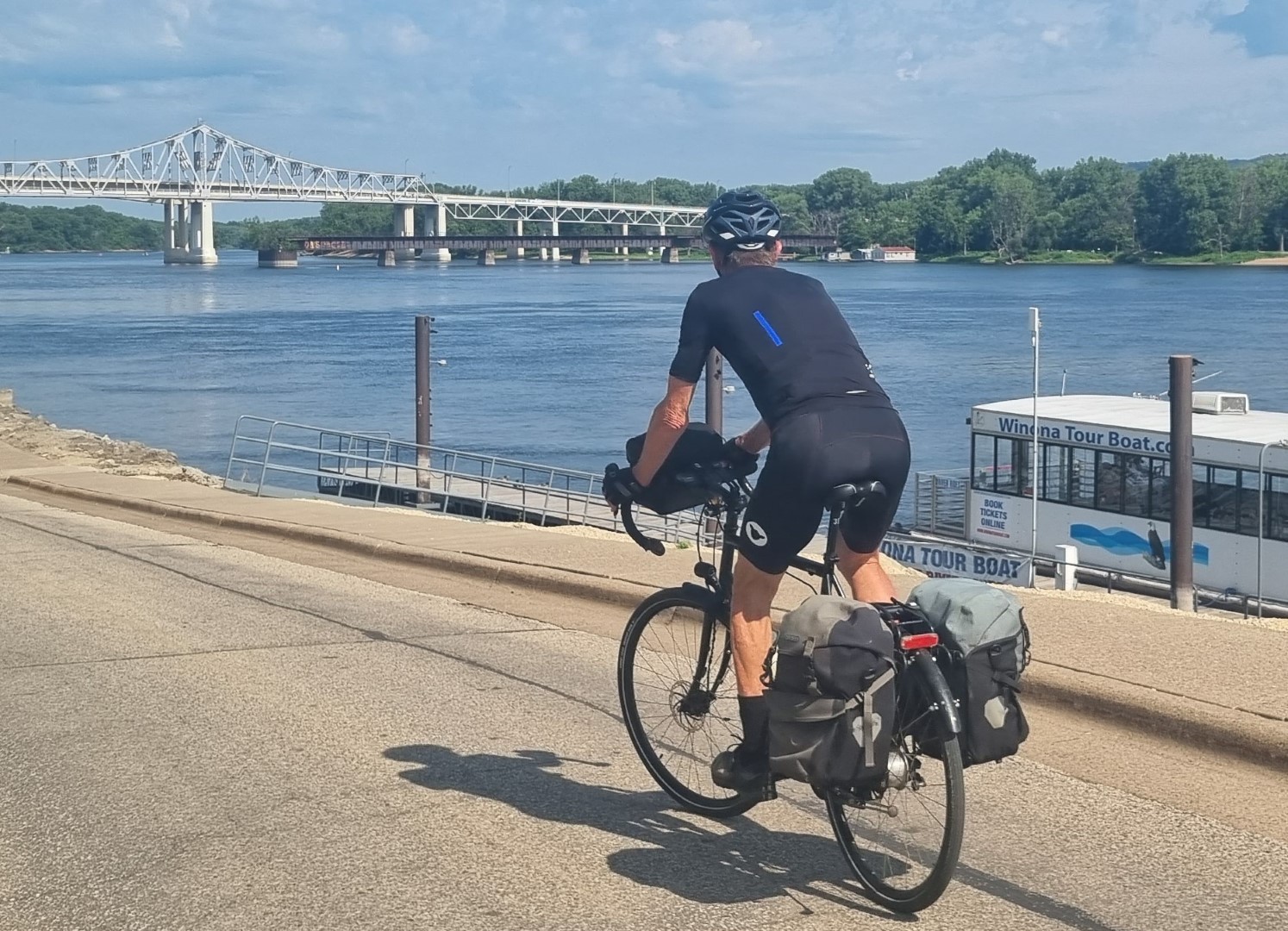 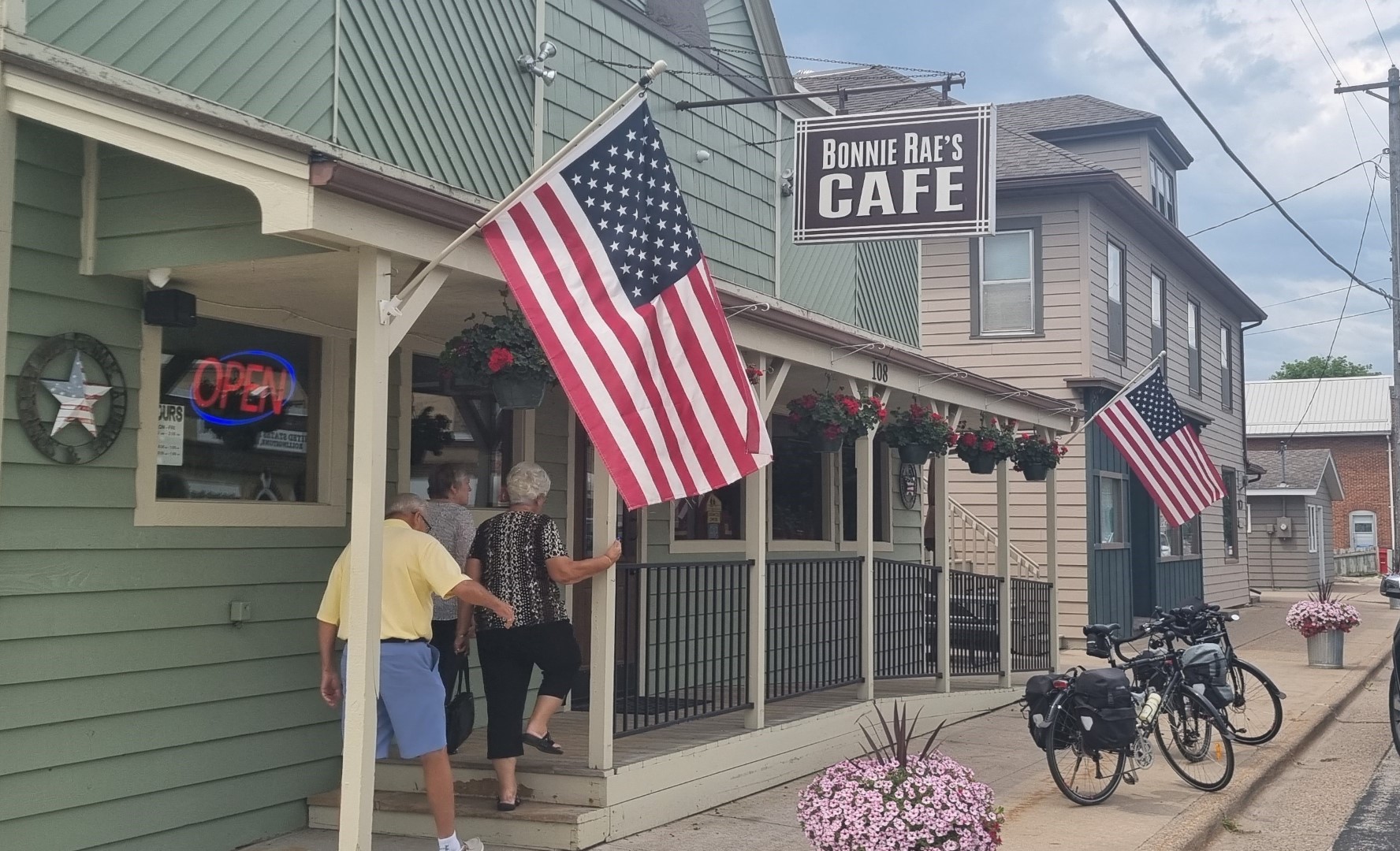 The small-town cafes and diners are good. There are flags everywhere. (By contrast, in Sydney there is a flag on the GPO and another on the Sydney Harbour Bridge. That’s about it.) But the US flag means very different things to different people.

Minneapolis. This is a bike friendly town. It was also George Floyd’s town and there are Black Lives Matter signs outside a lot of the homes. 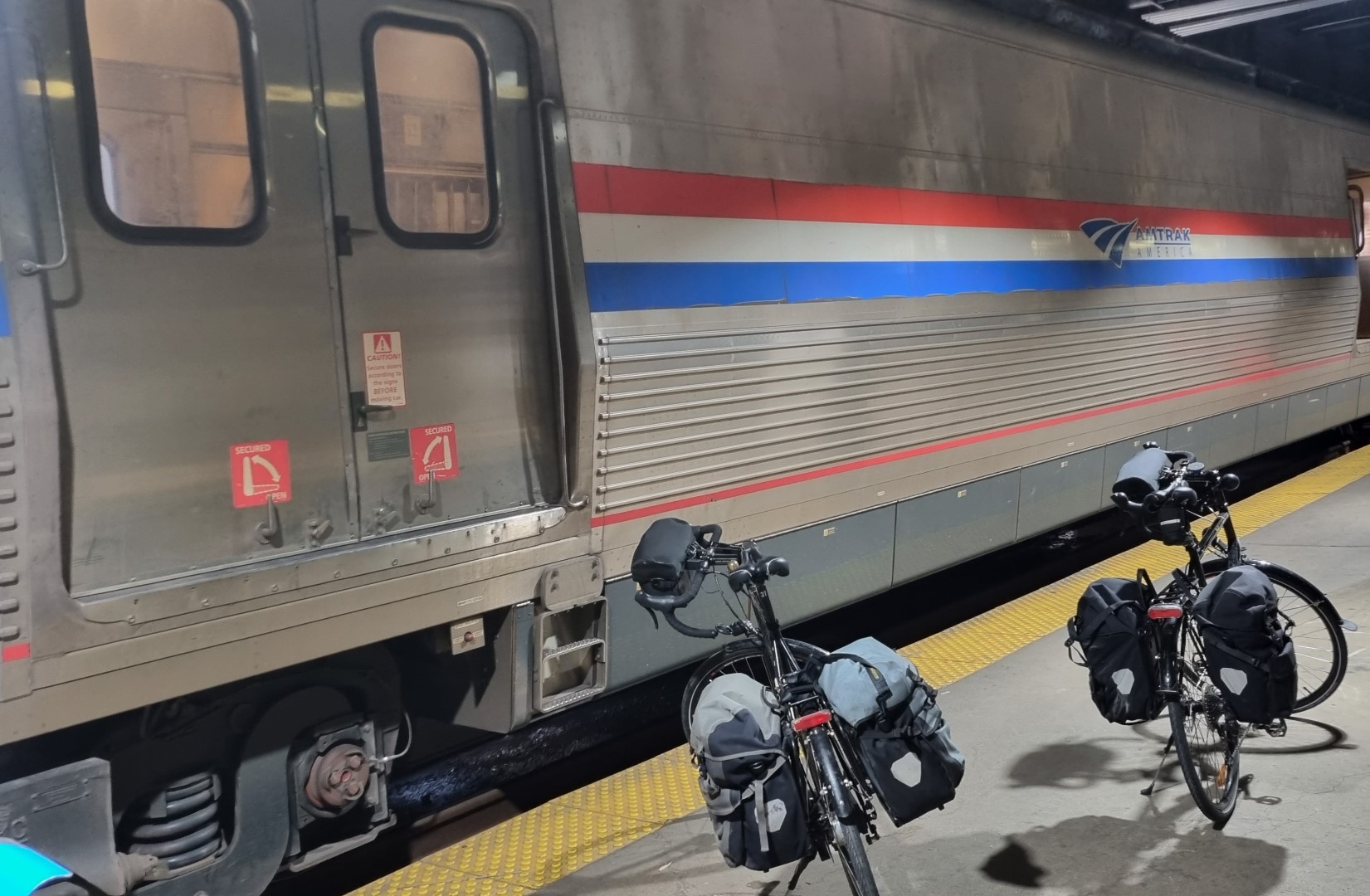 We use Amtrak to return to Chicago in preparation to depart from the USA. Not all Amtrak lines have Baggage Cars (checked baggage service). Those that do, only offer to add or remove luggage at some stops. The “Empire Builder” from Seattle to Chicago does have a baggage car and we could put our bikes on at Minneapolis and get them off at Chicago. US$20 per bike.

Given the hostility of US airlines to oversize luggage, it’s worth remembering that Amtrak can move you and your bike around.

Chicago is a fantastic city to ride in. Very good bike routes. 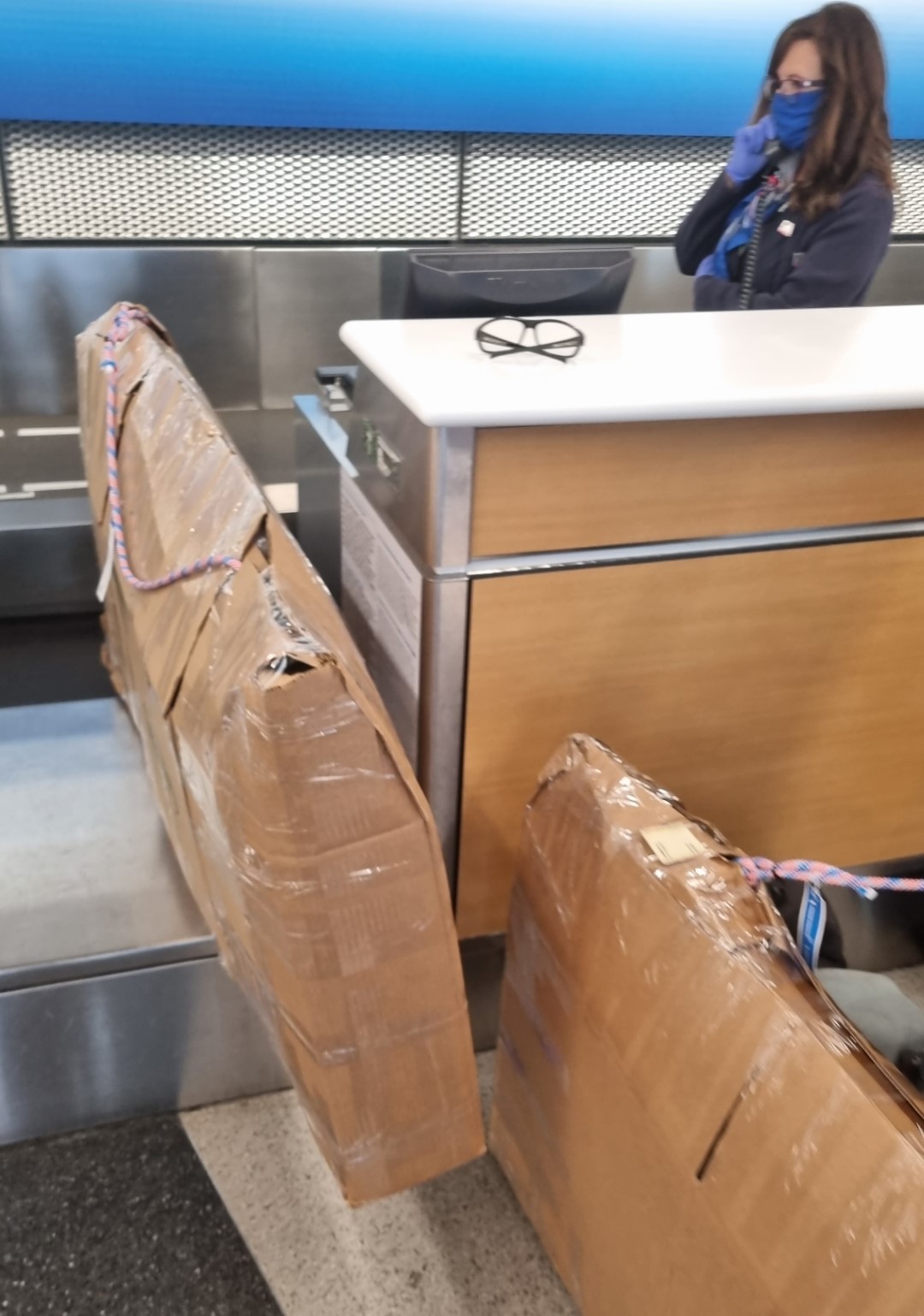 Packing in the USA

For starters, you cannot buy a bike carton at an airport. We have Qantas return tickets which means, even though we are catching AA flights from Chicago to Los Angeles, we are covered by QF baggage rules. So, we just need to pack the bikes somehow.

We choose a motel 5km from the airport that has an airport shuttle service. We can do the packing at the motel. There’s no bike shop for miles and, even if there was, how would we get cartons (if they had any) to the motel?

It’s raining and there are no taxis anymore. But nearby there is a storage place that sells removalist boxes. These are only 3-ply cardboard so are not really strong enough, but we have to make do. Learn how to pack your bike without a carton. In addition to the cartons, and from a hardware store, we buy a box-cutter, tape and zip-ties and some thick rope. We tie the rope to the headtubes and rear rack so that anyone wanting to lift the bike is forced to lift with the rope. It works perfectly. 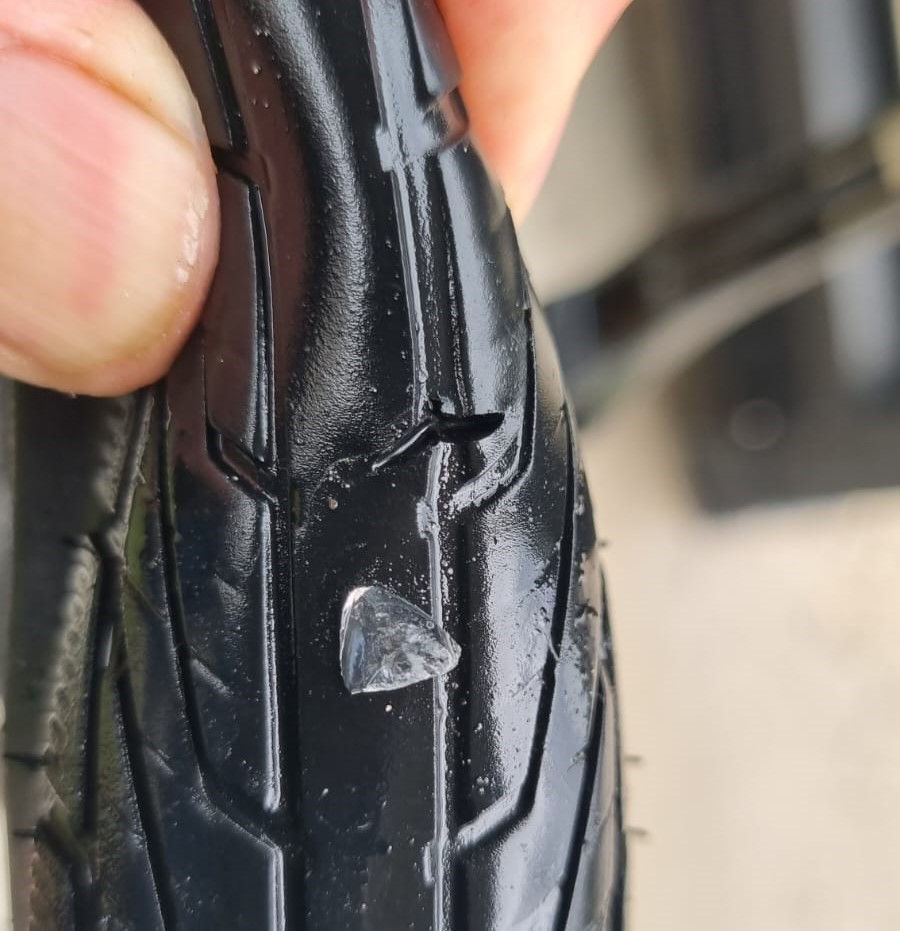 There was some glass on the roadsides, and I did get a flat due to a piece that probably would have punctured any tyre. 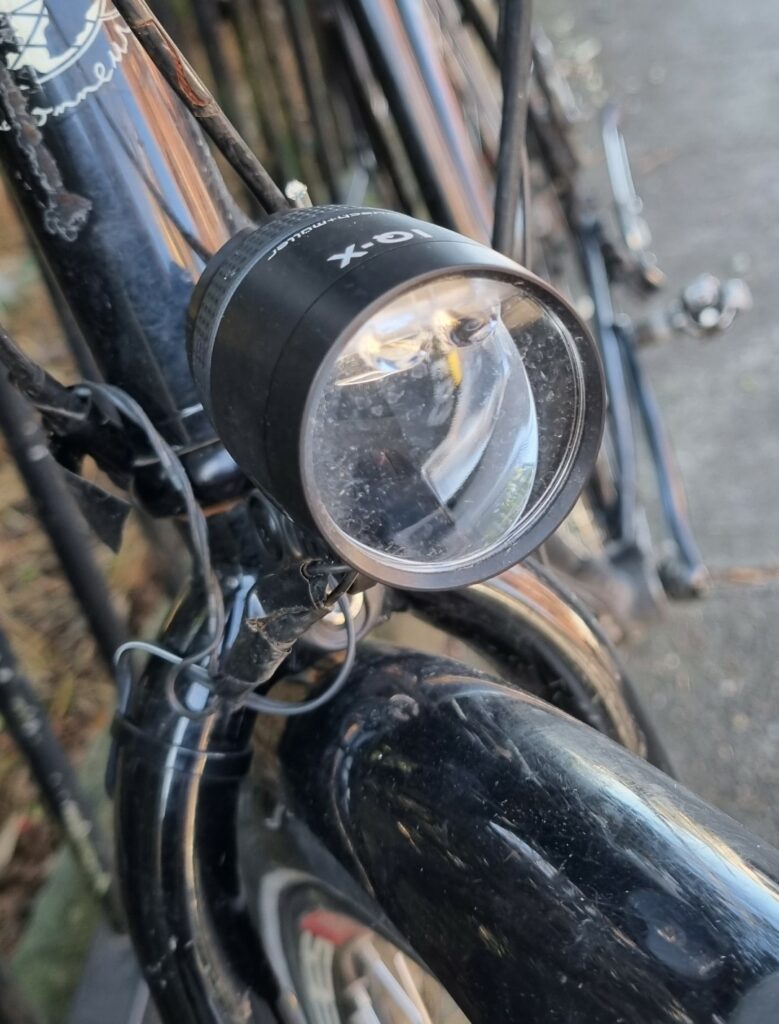 We have no issues with this headlight. It is the best light we have ever had. You leave it turned on all the time (DLR-Day Light Running).

Traffic can see it from a great distance. It does not blind oncoming cyclists on paths due to the beam shape. At 100 lux, it is bright enough and wide enough for very dark nights. 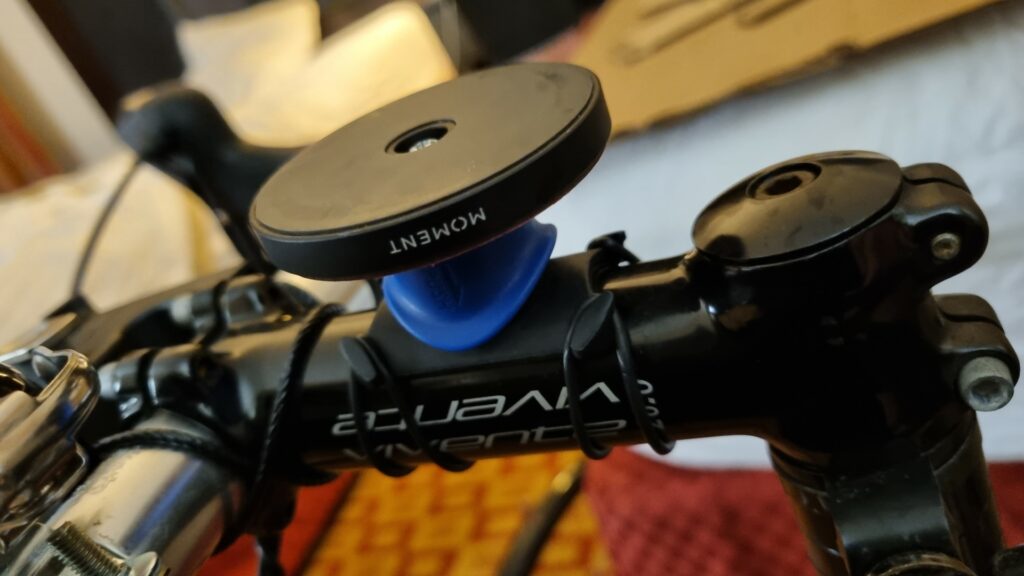 Our Rohloff bike has a Rokform mount and an android phone. We have used this mount for several years without ever having the phone come off. The Deccan bike was fitted with a Quadlock clamp with a Magsafe wallmount attached to it.

The iPhone was in a Magsafe case. Unfortunately, it did come off once when the bike hit a large pothole at speed. The phone survived with scratches, but it could have been smashed by traffic. 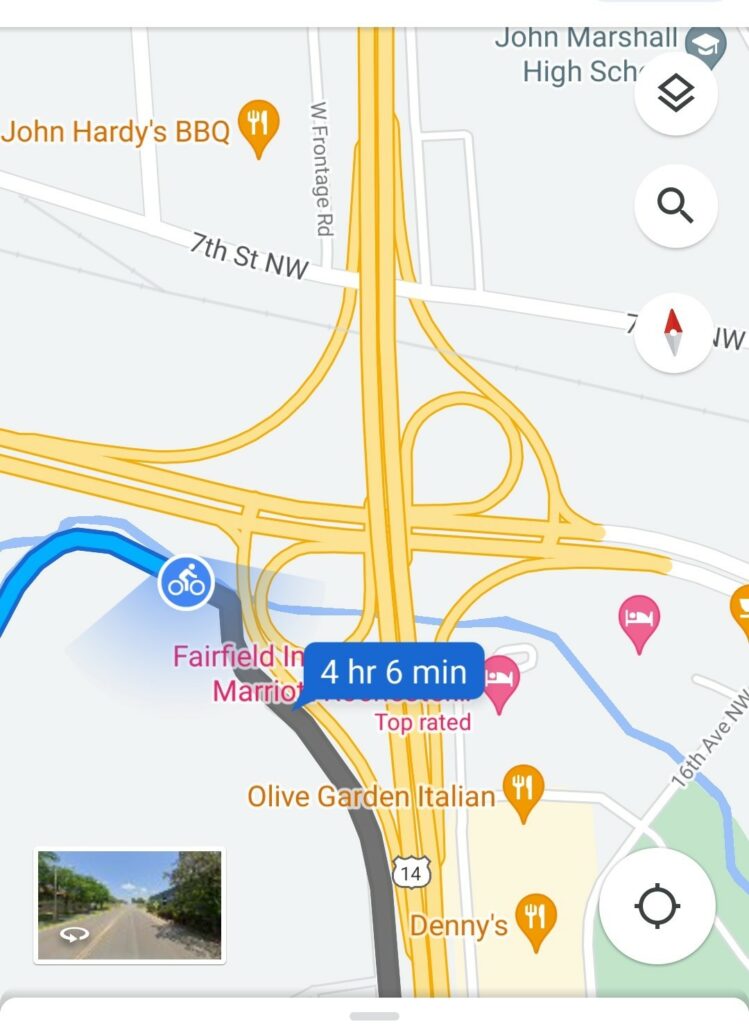 We’ve been test-riding and improving touring bikes since long before the internet was created. In the last 15 years google maps have been a steadily improving map option.

This ride was in the USA and there you can rely on Google Maps. Of course, that does in turn rely on you being on-line. Being able to zoom in and out, whilst riding, and confidently getting through, for example, massive road interchanges make the old paper-map days just a bad memory.