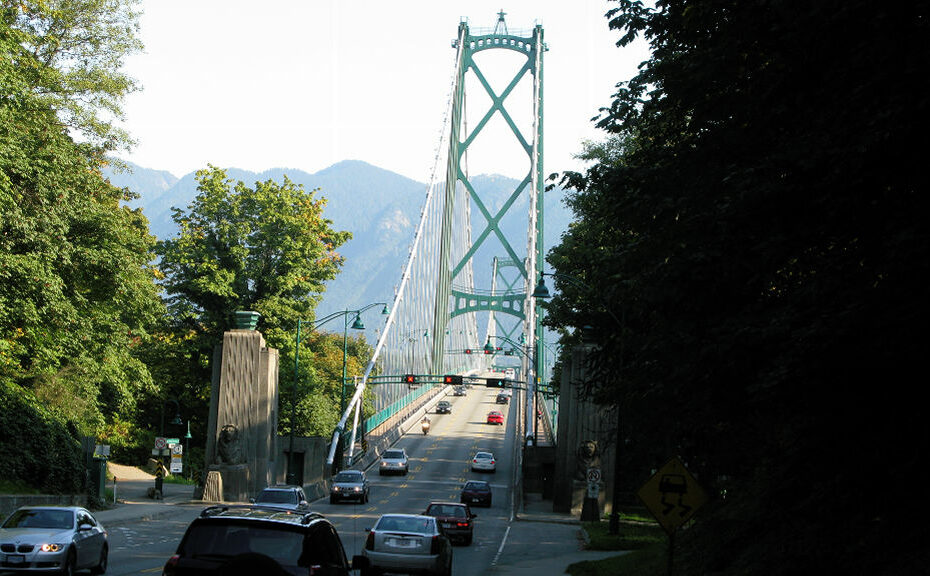 An urban tour of Vancouver and the surrounds. Particularly looking at the cycling infrastructure and the level of bicycle use. A test ride with the Ritchey Breakaway Coupling system. The intention was to be able to pack the bike in a small enough space to measure no more than 62” (W+L+H). This is the limit of luggage size to be not considered oversize. Frame coupling systems on the market promote themselves as being able to do this. But I discover it is definitely not true if the bike has 450mm chainstays, 700x35c tyres, full length mudguards, rear touring rack, and a tall steering tube. This test frame is an XXL but even if it was only an M it would have been most unlikely. So I become quite sceptical about marketing of coupling systems.

See the bike symbol in the overhead sign? Riding in from the airport it is great to encounter road signs that indicate major through streets are bikeways.

Vancouver has not gone for separated paths on the city streets but for line-marked paths like this. They can seem risky to new cyclists. But they legitimise cycling and grant generous road sharing to the cycling mode. At intersections, you can go through and be at less risk from turning traffic.

Vancouver is built around a harbour. Most of the city is on the south. Lions Gate Bridge is the cycling link to North Vancouver. The whole main (south) side is one administrative local government area. Perhaps having one large administrative area is a reason they have achieved so much.

From Stanley Park on the south end of the bridge there is a comfortable cycling approach.

Lions Gate Bridge is one-way on each side due to its narrowness. Compared to Sydney Harbour Bridge, Jacques Cartier Bridge in Montreal or the big NYC bridges, the cycle-way is strikingly open (not enclosed).

Out of the city today I discover the work of beavers, chopping down trees to make a dam.

Stanley Park is one of the places where recreational cyclists can ride away from traffic. There is a road in the park for cars too. Signs on the cycle-way say, if you want to exceed 15kph then please use the road. Meanwhile, on the road the limit is 30kph and signs say yield to cycles.

Signs like this legitimise bike riding. They are thoughtful and part of a clear agenda to encourage cycling.

Where a bridge is too narrow for a separate bike lane it is made clear that we may take the lane. And it is not a small sign.

Up on the NW corner of the city fringes, more signage saying we are allowed to cross over Hwy 99. Not surprisingly, motorists have “got it” and I am not being harassed at all.

The 2008 test bike using Ritchey couplings, Tiagra shifters, front cable disc and rear cantilever. The outboard BB has started to develop a bit of movement and has me thinking of getting a square taper cartridge BB.

Not about bicycles. It is a rainy day and these guys have done a concrete pour. While the finishers work on the concrete, other workers hold a big sheet of plastic above them to stop it getting wet.

My last day and more rain. This sign underlines the difference between Sydney and Vancouver. In both cases we are allowed to ride in bus lanes. But in Sydney it is not signed that we can. Riding on Parramatta Rd for example in peak hour can be intimidating. In Vancouver it is right up there on the sign that we are permitted to ride there. And, significantly, motorcycles are not.