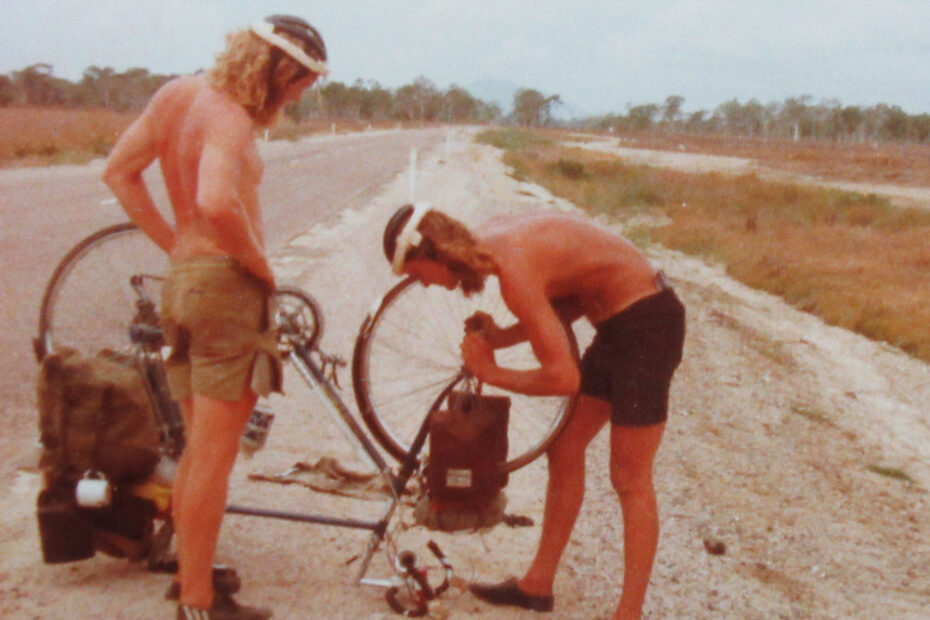 Sydney to the Daintree River, a tour of the Australian East Coast in 1977. Having met on the “Down To Earth” ride in early 1977, Noel McFarlane, Dave McPherson and Barb Lovell took off from Sydney in the winter of that year, heading north. There was no planned route. People would ask what was our destination and we would say we didn’t have one. We ended up inland most of the time, frequently crossing the Great Dividing Range, going as far inland as Emerald, working around Bowen picking fruit and reaching the crocodile warning signs at the Daintree River north of Cairns before turning back.

A highlight of the trip in Queensland was cycling what was called “the horror stretch” or “the triple murder highway”. From Marlborough to Sarina via Lotus Creek. When we said we were just going north people would always say…”yes, but you won’t ride the horror stretch will you?” It turned out to be one of the most beautiful parts of Australia that you could find.

Noel getting his gear ready outside the old Randle in North Newtown, Sydney.

Caroline, Danny and Chris, all teachers, came up and joined us in their break at the end of the school term. We camped in beautiful bush places night after night.

Bike maintenance in the 1970s was a must for bike tourers. We would regularly wash our chains, regrease and adjust bearings and check tightness of things.

The lovely Caroline Weller, who so sadly was not to survive this trip.

In the caravan park at Rockhampton, Barb, a very experience bike mechanic, is explaining things to a sole traveller that we met there.

In those times, bike spokes were crap. Decades later, very good spokes are available and are standard on top European and Vivente touring bikes. On the way to Cairns, between the three of us, we broke and replaced over 100 Ashai (Japanese) 14G steel spokes.

Camping beside small streams every night, we could have gone on forever.

Dave pondering the rewelding on his Europa frame. Notice the Karrimor rack. We all had them and on the same day, in Nth NSW, two of them broke, both in the same spot.

Pushing North. In the 1970s there was no modern suncream. There was pink zinc. Also notice the pumps. We had “English” valves and the pumps had hoses. You were doing well to achieve 50 psi.

About 100km north of Cairns we hit the gravel. Soon after that we were making camp beside rivers with signs warning about crocs. We deemed that to be “north enough”. We rode around the Atherton Tableland and then got the train back to Sydney.